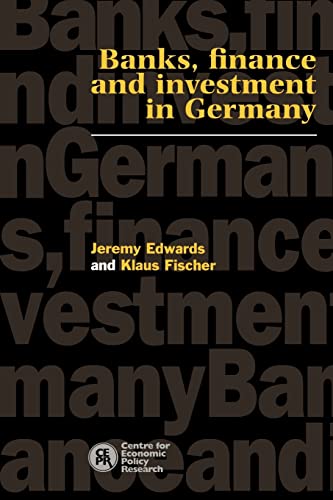 Banks, Finance and Investment in Germany
by Jeremy Edwards

Banks, Finance and Investment in Germany by Jeremy Edwards

This book analyses the widely-held view of the merits of the 'bank-based' German system of finance for investment, and shows that this view is not supported by evidence from the post-war period. The institutional features of the German system are such that universal banks have control of voting rights at shareholders' meetings due to proxy votes, and they also have representation on companies' supervisory boards. These features are claimed to have two main benefits. One is that the German system reduces asymmetric information problems, enabling banks to supply more external finance to firms at a lower cost, and thus increasing investment. The other is that German banks are able to mould and control managements of firms on behalf of shareholders, and thus ensure that firms are run efficiently. This book assesses whether empirical evidence backs up these claims, and shows that the merits of the German system are largely myths.

'... a most welcome book ... there is a surprising amount of information collected, well organised, and thoughtfully discussed.' Journal of Economic Literature
"This is a well written book, timely also, on an important topic....The compilation of detailed empirical data and the thorough theoretical background of the discussion make the book a most valuable contribution to the corporate finance literature." Economica
"The authors should be applauded for concentrating on the thorough and fair testing of a hypothesis." Daniel Hardy, Finance & Development

1. Introduction; 2. A theoretical framework for analysing the effects of the financial system on economic performance; 3. The significance of bank loans in the finance of aggregate investment in Germany; 4. Legal forms of enterprise in Germany, and their implications for the role of the German financial system; 5. The structure of the German banking system; 6. Bank supervisory board representation and other aspects of German bank lending to firms; 7. German bank behaviour when firms are in financial distress; 8. The ownership structure of large German firms and its implications for German banks' corporate control role; 9. Do German banks act as delegated exercisers of equity's control rights?; 10. Conclusion.

GOR010298748
Banks, Finance and Investment in Germany by Jeremy Edwards
Jeremy Edwards
Used - Very Good
Paperback
Cambridge University Press
1996-01-26
268
0521566088
9780521566087
N/A
Book picture is for illustrative purposes only, actual binding, cover or edition may vary.
This is a used book - there is no escaping the fact it has been read by someone else and it will show signs of wear and previous use. Overall we expect it to be in very good condition, but if you are not entirely satisfied please get in touch with us.