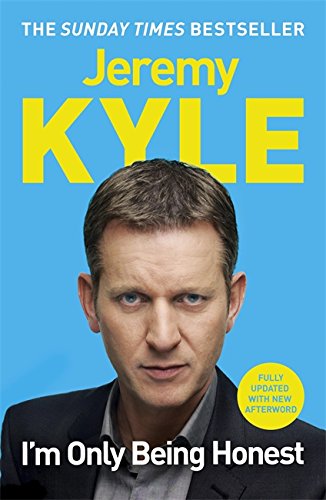 Mixing stories from The Jeremy Kyle Show with moments from his own life, Britain's biggest daytime television star offers a straight-talking solution to the nation's problems.

Jeremy Kyle is not just the television presenter famous for his frank, and sometimes confrontational, approach to his guest's problems. He is also a son, a brother, a father, and a recovering addict. Every part of his life has in some way influenced and shaped the views he expresses on his show. From his happy upbringing in Reading, to his daily struggles with OCD and overcoming his problems with gambling, his knowledge of life's ups and downs comes from hard-won experience, and have taught him that honesty - above all with oneself - can be the key to a life well-lived.

Here, in his first book, he takes a hard look at the social problems blighting modern Britain and seeks a route towards their solution. He stresses the need for the firm hand and unconditional love that seems so absent from certain young parents and questions the morals of those who see having children purely as a money-making exercise. And he maps out an agenda for change, insisting on the importance of personal responsibility and strong government in ironing out our nation's creases.

Recounting his own story, alongside the tales of the people from his often controversial show, Kyle delves into the shady, neglected corners of our society and surfaces with a spirited call-to-arms. The result is not just an honest judgment of modern British life, but a no-holds-barred account of his own, told with all the candour, spirit and honesty that have become his trademark.

Jeremy Kyle is a television and radio presenter, best known as the controversial host of The Jeremy Kyle Show, which has broadcast on ITV1 five days a week for the last five years, recently celebrating its 1000th episode. He also writes regularly for the Sun newspaper and Pick Me Up magazine, and has spent twelve years on radio where he currently hosts his own show on talkSPORT. Jeremy's first book, I'm Only Being Honest, was a Sunday Times bestseller and You Couldn't Make It Up is his second book. He lives in Berkshire with his wife Carla and has four children.
GOR001434154
9780340980804
034098080X
I'm Only Being Honest by Jeremy Kyle
Jeremy Kyle
Used - Very Good
Paperback
Hodder & Stoughton General Division
2009-11-12
336
N/A
Book picture is for illustrative purposes only, actual binding, cover or edition may vary.
This is a used book - there is no escaping the fact it has been read by someone else and it will show signs of wear and previous use. Overall we expect it to be in very good condition, but if you are not entirely satisfied please get in touch with us
Trustpilot