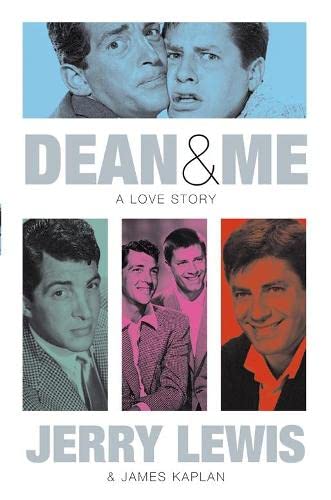 Dean And Me
by Jerry Lewis

In Stock
£6.49
The funny, atmospheric memoir of performing alongside Dean Martin in the most successful double act of all time
Very Good Good
Only 2 left

Dean And Me Summary

Dean And Me: A Love Story by Jerry Lewis

The No1 New York Times Bestseller

Before the string of hit songs, the Rat Pack, and the stellar movie career, Dean Martin spent ten years partnering Jerry Lewis in one of the most successful double acts of show business history. In this wise-cracking yet candid memoir, Lewis recalls with crystal clarity the highs and lows of his relationship with Dean: remembering their first meeting on a New York street corner one spring afternoon, the early improvised performances in mob owned nightclubs, and the giddy days of Hollywood super-stardom, when it seemed the couples high-rolling lifestyle would last for ever. It didn't. On July 24th 1956, Dean and Jerry split and the two men weren't to speak to one another for twenty years.

Jerry Lewis is one of the few surviving Hollywood legends from the period and he is a wonderful raconteur whose tales reveal much about Dean Martin's craftsmanship and enigmatic charm. In his own unique voice he evokes all the glamour of the era - the casinos, the endless pranks, the cocktails, the mobsters, and the women. He writes movingly too of the thrill of the youthful duo's sudden, startling success, and the slow sad erosion of the fun that followed.

After the split with Dean Martin, Jerry Lewis was the creator and star of a series of hugely successful movie comedies, such as The Bell Boy (1960) and his masterpiece The Nutty Professor (1963). He has been widely hailed as one of the greatest director-comedians of the twentieth century and has received numerous honours, including appointment to the Legion D'Honneur. James Kaplan has written novels, essays, and reviews, as well as over a hundred major profiles for many magazines, including The New Yorker , Vanity Fair, and Esquire. He lives in Westchester, New York, with his wife and three sons.

GOR001126439
Dean And Me: A Love Story by Jerry Lewis
Jerry Lewis
Used - Very Good
Paperback
Pan Macmillan
2007-06-01
352
0330443534
9780330443531
N/A
Book picture is for illustrative purposes only, actual binding, cover or edition may vary.
This is a used book - there is no escaping the fact it has been read by someone else and it will show signs of wear and previous use. Overall we expect it to be in very good condition, but if you are not entirely satisfied please get in touch with us.