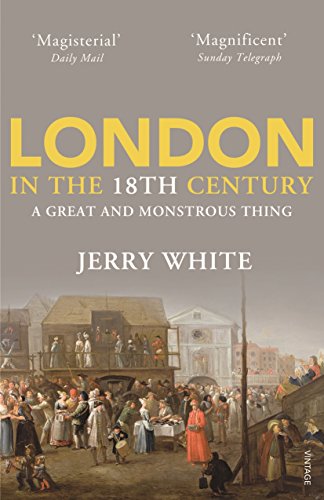 London In The Eighteenth Century
by Jerry White

In Stock
£5.99
London in the eighteenth century was very much a new city, risen from the ashes of the Great Fire.
Very Good
Only 2 left

London In The Eighteenth Century Summary

London In The Eighteenth Century: A Great and Monstrous Thing by Jerry White

London in the eighteenth century was very much a new city, risen from the ashes of the Great Fire. With thousands of homes and many landmark buildings destroyed, it had been brought to the brink. But the following century was a period of vigorous expansion, of scientific and artistic genius, of blossoming reason, civility, elegance and manners. It was also an age of extremes: of starving poverty and exquisite fashion, of joy and despair, of sentiment and cruelty. Society was fractured by geography, politics, religion and history. And everything was complicated by class. As Daniel Defoe put it, London really was a 'great and monstrous Thing'. Jerry White's tremendous portrait of this turbulent century explores how and to what extent Londoners negotiated and repaired these open wounds. We see them going about their business as bankers or beggars, revelling in an enlarging world of public pleasures, indulging in crimes both great and small - amidst the tightening sinews of power and regulation, and the hesitant beginnings of London democracy. In the long-awaited finale to his acclaimed history of London over 300 years, Jerry White introduces us to shopkeepers and prostitutes, men and women of fashion and genius, street-robbers and thief-takers, as they play out the astonishing drama of life in eighteenth-century London.

London In The Eighteenth Century Reviews

"White is one of our great chroniclers of London and this beautifully written, impeccably researched and incredibly generous book is a necessity for those of us who are not yet tired of life" -- Frances Wilson * Telegraph *
"[A] page-turner biography of the capital, full of amazing facts and anecdotes, a book that anyone wanting food for thought about social history or human nature will treasure" * Evening Standard *
"An invigorating yet thoughtful tour through the metropolis's most extraordinary and bracing of centuries" -- Andrew Holgate * Sunday Times *
"A tremendous work - well researched, well written, solid and reliable, mastering a complex subject in an authoritative account that is a pleasure to read" -- Dan Cruikshank * Country Life *
"A dazzling account" * Daily Express *

Professor Jerry White teaches London history at Birkbeck, University of London. He is the author of an acclaimed trilogy of London from the eighteenth to the twentieth centuries. His more recent books include Mansions of Misery: A Biography of the Marshalsea Debtors' Prison and Zeppelin Nights, a social history of London during the First World War. He was awarded the honorary degree of Doctor of Literature by the University of London in 2005 and is a Fellow of the Royal Historical Society.

GOR004825092
London In The Eighteenth Century: A Great and Monstrous Thing by Jerry White
Jerry White
Used - Very Good
Paperback
Vintage Publishing
2013-03-07
704
0712600426
9780712600422
N/A
Book picture is for illustrative purposes only, actual binding, cover or edition may vary.
This is a used book - there is no escaping the fact it has been read by someone else and it will show signs of wear and previous use. Overall we expect it to be in very good condition, but if you are not entirely satisfied please get in touch with us.