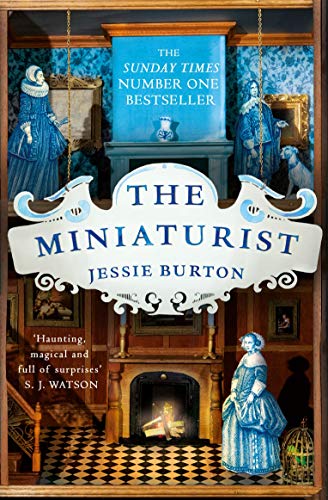 The Miniaturist
by Jessie Burton

The phenomenal number one bestseller and a major BBC TV series.
Winner of the Specsavers National Book Award and Waterstones Book of the Year
A Richard and Judy Book Club selection

There is nothing hidden that will not be revealed . . .

On an autumn day in 1686, eighteen-year-old Nella Oortman knocks at the door of a grand house in the wealthiest quarter of Amsterdam. She has come from the country to begin a new life as the wife of illustrious merchant trader Johannes Brandt, but instead she is met by his sharp-tongued sister, Marin. Only later does Johannes appear and present her with an extraordinary wedding gift: a cabinet-sized replica of their home. It is to be furnished by an elusive miniaturist, whose tiny creations mirror their real-life counterparts in unexpected ways . . .

Nella is at first mystified by the closed world of the Brandt household, but as she uncovers its secrets she realizes the escalating dangers that await them all. Does the miniaturist hold their fate in her hands? And will she be the key to their salvation or the architect of their downfall?

Beautiful, intoxicating and filled with heart-pounding suspense, Jessie Burton's magnificent debut novel The Miniaturist is a story of love and obsession, betrayal and retribution, appearance and truth.

The kind of book that reminds you why you fell in love with reading -- S. J. Watson, author of Before I Go to Sleep
A fabulously gripping read that will appeal to fans of Girl With a Pearl Earring and The Goldfinch, but Burton is a genuinely new voice with her visceral take on sex, race and class . . . Burton writes great complex female characters * Observer *
A terrific novel: compelling cast, gripping plot, writing to savour -- Nathan Filer, author of The Shock of the Fall
A remarkable debut - complex, involving and deeply atmospheric -- Deborah Moggach, author of Tulip Fever
The Miniaturist by Jessie Burton is set in 17th century Amsterdam where a trader presents his new wife Nella with a miniature replica of their home. Its tiny occupants mirror their real-life counterparts and show Nella what grave dangers lie in wait. -- Hot Books of 2014 * Daily Express *
A delight on every page, The Miniaturist completely immerses the reader in sumptuous but strict seventeenth-century Amsterdam. Like the intricately crafted doll's house at the centre of the novel, there is a surprise behind each closed door and curtain - hidden worlds of deceit and seduction, guilds and guilders, candied walnuts and sugar loaves. Burton's novel is lovingly done, and exquisite to read -- Naomi Wood, author of Mrs. Hemingway
Utterly beguiling and impeccably written. I am missing the characters already -- Emylia Hall, author of The Book of Summers
Utterly transporting, The Miniaturist is one of those rare debut novels that excels in every regard. The past is brought to life in potent, sensory detail: one feels steeped in it. Burton's prose beguiles the reader, while a riptide of a plot takes hold with an unrelenting grip of suspense. My first instinct on finishing this book was to immediately read it again -- Hannah Kent, author of Burial Rites

Jessie Burton is the author of the Sunday Times number one and New York Times bestsellers The Miniaturist and The Muse, and the children's book The Restless Girls. In its year of publication The Miniaturist sold over a million copies, and in 2017 it was adapted into a major TV series for BBC One. Her novels have been translated into thirty-eight languages, and she is a regular essay writer for newspapers and magazines. She lives in London.

GOR006309730
The Miniaturist by Jessie Burton
Jessie Burton
Used - Very Good
Paperback
Pan Macmillan
2015-01-01
448
1447250931
9781447250937
Winner of National Book Awards New Writer of the Year 2014 (UK) Winner of National Book Awards Book of the Year 2014 (UK) Winner of Specsavers Gold Bestseller Award 2018 (UK) Long-listed for Desmond Elliott Prize 2015 (UK) Long-listed for Waverton Good Read Award 2014 (UK)
Book picture is for illustrative purposes only, actual binding, cover or edition may vary.
This is a used book - there is no escaping the fact it has been read by someone else and it will show signs of wear and previous use. Overall we expect it to be in very good condition, but if you are not entirely satisfied please get in touch with us.