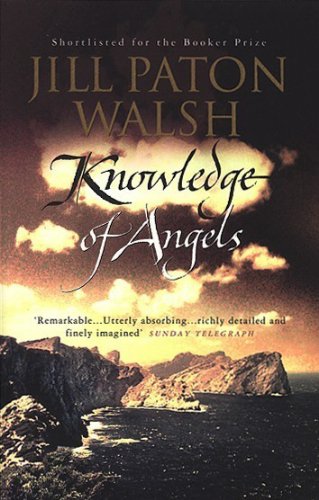 In Stock
£13.99
It is, perhaps, the fifteenth century and the ordered tranquillity of a Mediterranean island is about to be shattered by the appearance of two outsiders: one, a castaway, plucked from the sea by fishermen, whose beliefs represent a challenge to the established order;
Very Good Good Well Read
13 in stock

It is, perhaps, the fifteenth century and the ordered tranquillity of a Mediterranean island is about to be shattered by the appearance of two outsiders: one, a castaway, plucked from the sea by fishermen, whose beliefs represent a challenge to the established order; the other, a child abandoned by her mother and suckled by wolves, who knows nothing of the precarious relationship between Church and State but whose innocence will become the subject of a dangerous experiment. But the arrival of the Inquisition on the island creates a darker, more threatening force which will transform what has been a philosophical game of chess into a matter of life and death...

"'A compelling medieval fable, written from the heart and melded to a driving narrative which never once loses its tremendous pace'" * Guardian *
"'An irresistible blend of intellect and passion'" * Mail on Sunday *
"'This remarkable novel resembles an illuminated manuscript mapped with angels and mountains and signposts, an allegory for today and yesterday too. A beautiful, unsettling moral fiction about virtue and intolerance'" * Observer *
"'Remarkable...Utterly absorbing...richly detailed and finely imagined'" * Sunday Telegraph *
"'The lucidity of Jill Paton Walsh's style and the dexerity of the narrative are such that her book reads more like a good thriller than a weighty novel of ideas...An ingenious fable'" * The Times *

Jill Paton Walsh was educated at St Michael's Convent, North Finchley, and at St Anne's College, Oxford. She is the author of several highly praised adult novels: Lapsing, A School For Lovers, Knowledge of Angels, which was shortlisted for the 1994 Booker Prize, Goldengrove Unleaving, The Serpentine Cave and A Desert in Bohemia. She has also won many awards for her children's literature, including the Whitbread Prize, the Universe Prize and the Smarties Award. She has three children and lives in Cambridge.

GOR001092464
Knowledge Of Angels: Man Booker prize shortlist by Jill Paton Walsh
Jill Paton Walsh
Used - Very Good
Paperback
Transworld Publishers Ltd
1995-01-01
288
0552997803
9780552997805
Short-listed for Booker Prize for Fiction 1994
Book picture is for illustrative purposes only, actual binding, cover or edition may vary.
This is a used book - there is no escaping the fact it has been read by someone else and it will show signs of wear and previous use. Overall we expect it to be in very good condition, but if you are not entirely satisfied please get in touch with us.