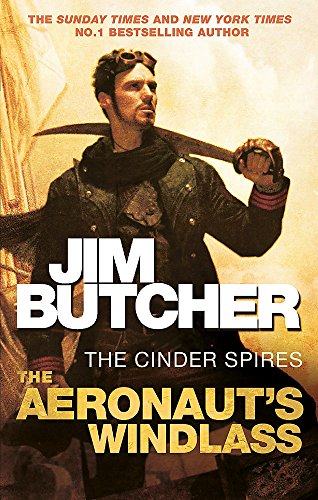 The Aeronaut's Windlass
by Jim Butcher

The Aeronaut's Windlass: The Cinder Spires, Book One by Jim Butcher

'Great action scenes, a fascinating world, and characters of a sort I've never seen before. This is everything I've come to expect from Jim Butcher, but in a delightful new flavour'
PATRICK ROTHFUSS

'Beware fellow readers, herein lies adventure that will keep you from food or rest . . .'
PATRICIA BRIGGS

Jim Butcher, the number one bestselling author of The Dresden Files, begins a new series set in a gloriously imagined world of noble families, marvellous technology and magic-wielding warriors.

Since time immemorial humanity has lived inside the Spires, habitats towering for miles over the dangerous, monster-inhabited surface of the world.
Captain Grimm of the merchant airship, Predator, was dismissed from Spire Albion's military in disgrace - now his ship and crew are all he has, and he's fiercely loyal to both. When the Predator is severely damaged in combat Grimm has only one choice - take on a clandestine mission for Albion's leaders, or stay grounded for good.
And even as Grimm undertakes this perilous task, he will learn that the conflict between the Spires is merely a premonition of things to come. Humanity's ancient enemy, silent for more than ten thousand years, has begun to stir once more. And death will follow in its wake . . .

Great action scenes, a fascinating world, and characters of a sort I've never seen before. This is everything I've come to expect from Jim Butcher, but in a delightful new flavour -- Patrick Rothfuss, author of THE NAME OF THE WIND
Wow. Just wow. Beware fellow readers, herein lies adventure that will keep you from food or rest . . . Butcher proves yet again that he is an amazing storyteller -- #1 New York Times bestselling author Patricia Briggs
This is Jim Butcher at his best, drawing a fully realized, richly detailed, and downright fun literary world where fearless aeronauts ride the aether, brilliant wizards struggle with doorknobs, and a thirty-pound feline warrior keeps a pet human named Little Mouse. It's steam-punk meets magic with a dose of sci-fi for seasoning. Buy it and read it. You'll be glad you did! -- New York Times bestselling author David Weber

Jim Butcher is the no. 1 Sunday Times and New York Times bestselling author of the Dresden Files, the Codex Alera and the Cinder Spires novels. He lives in the Rocky Mountains of Colorado.

GOR007761751
The Aeronaut's Windlass: The Cinder Spires, Book One by Jim Butcher
Jim Butcher
Cinder Spires
Used - Very Good
Paperback
Little, Brown Book Group
2016-07-05
640
0356503666
9780356503660
Short-listed for Hugo Award Best Novel category 2016 (UK)
Book picture is for illustrative purposes only, actual binding, cover or edition may vary.
This is a used book - there is no escaping the fact it has been read by someone else and it will show signs of wear and previous use. Overall we expect it to be in very good condition, but if you are not entirely satisfied please get in touch with us.