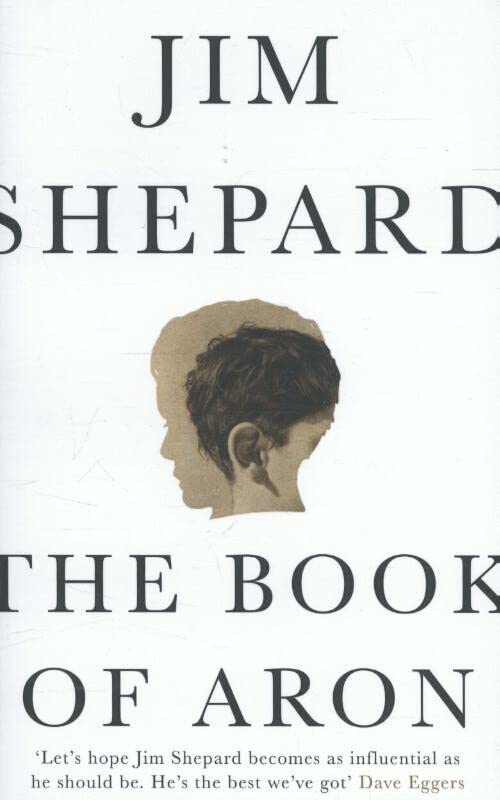 The Book of Aron
by Jim Shepard

The Book of Aron Summary

The Book of Aron by Jim Shepard

My mother and father named me Aron, but my father said they should have named me What Have You Done or What Were You Thinking.

Aron is a nine-year-old Polish Jew, and a troublemaker. As the walls go up around the ghetto in Warsaw, as the lice and typhus rage, food is stolen and even Jewish police betray their people, Aron smuggles from the other side to survive.

In a place where no one thinks of anyone but himself, the only exception is Doctor Korczak; trying to keep a hundred and fifty orphans from starving.

They call the Doctor a hero. Aron is not a hero. He is not special or selfless or spirited. He is ordinary.

He is willing to do what the Doctor will not.

Customer Reviews - The Book of Aron

The Book of Aron Reviews

Let's hope Jim Shepard becomes as influential as he should be. He's the best we've got * Dave Eggers *
Shepard is a fantastic writer - compassionate, funny, and fearless ... inspires us to look more closely at life, and be more caring * George Saunders *
Heartbreaking, shattering, charming and brilliant - there isn't one word that isn't the young boy's. Jim Shepard has written some of the best books I've read. The Book of Aron is his best * Roddy Doyle *
Very brave. And a heartbreaking historical novel that ends in Treblinka may not be what many readers are expecting from a novelist and short-story writer whose ironic touch is often comedic. But Jim Shepard has written a Holocaust novel that stands with the most powerful writing on that terrible subject * John Irving *
His insight is humbling, deeply grained, outrageously perceptive and full of a signature humour ... If you haven't read Shepard, you should, because he's also one of the US's finest writers, full of wit, humanity and fearless curiosity ... It's a hell of a thing to walk the earth with Jim Shepard -- Joshua Ferris * Guardian *
This moving novel bears witness to human complexity with an uncompromising compassion. It is a testament not only to Janusz Korczak and the children in the Warsaw Ghetto but to every child abandoned in war. History must open our hearts to the present and this is Jim Shepard's powerful achievement * Anne Michaels *
The Book of Aron is a novel of profound and delicate simplicity - passivity, almost - but one which calmly and indelibly delivers the bluntest of impacts. In other words, it's a knock-out (though you never saw it coming) * Jim Crace *
A remarkable novel destined to join the shelf of essential Holocaust literature. Although relentless in its portrayal of systematic evil, The Book of Aron is, nonetheless, a story of such startling candour about the complexity of heroism that it challenges each of us to greater courage . . . Let's set aside puffery about the best novel of the month or even the year; Shepard has created something transcendent and timeless in this slim masterpiece . . . Shepard dares to move his narrative down the asymptote of despair, and the moral heroism he describes on that path toward infinity, you will never forget -- Ron Charles * Washington Post *
Any number of writers have published fiction about the Holocaust, but few have succeeded in producing a work as simple and yet so moving as The Book of Aron . . . Shepard chronicles with compassion and clarity what happens as the Nazi persecution grows ever worse * Sunday Times *
The horrors are described from the child's point of view; there is no reflection, no judgement. This is what the world is like. The pared prose is affecting . . . Unlike many of the books and films featuring children in the Holocaust, The Book of Aron reeks of the real * Spectator *
By reclaiming an insignificant voice and deploying it to observe a great man, Shepard turns hell into a testament of love and sacrifice. The Book of Aron is his best novel yet, a short and moving masterpiece -- Joshua Ferris * Guardian *
It is extraordinary how Shepard, using the voice of a poorly educated boy, can conjure up such a powerful story. Despite the inevitability of the conclusion, it is utterly shattering. The Book of Aron is a masterpiece -- Antonia Senior * The Times, Book of the Month *
Shepard is one of America's very finest writers . . . By focusing on the trauma of one young boy, he personalises the descent into hell . . . He has not only created something shocking, haunting and truly special, but captures the essence of humanity and its opposite, compassion as well as cruelty. An unforgettable book -- Billy O'Callaghan * Irish Examiner *
Compelling . . . [Aron's] voice is as intent in hope and his mind as quelled by reality . . . Here is a world to quell any reader . . . Sometimes 'old people' can be more childlike than children - a grace that Shepard presents poignantly * Tablet *
The technique is a kind of under-writing - emotional bathos - the sort of annalistic approach endorsed by Berel Lang [...] when he suggested that Holocaust writing at its sincerest and most compelling takes the form of history, rather than fiction or poetry. The Book of Aron has a biblical feel: a rascal's End of Days. Its narrator is, from the outset, an unruly force of nature . . . Moving * Times Literary Supplement *
The Book of Aron is not the first Holocaust novel to stir its readers in this way, but it carries the burden of its subject with a mordant frankness at once heartbreaking, refreshing and - hardest won of all - enchanting. Jim Shepard's novel enters a crowded canon and it stands there, head and shoulders, with the best -- Toby Lichtig * Jewish Quarterly *
Jim Shepard, a writer of extraordinary historical vision, psychological acuity, and searing irony, presents a profoundly moving portrait of its young narrator Aron; explores, with awe, our instinct to adapt and survive; and through the evolving consciousness of his phenomenally commanding young narrator, exposes the catastrophic impact of war and genocide on children * Carnegie Award *
Book of the Year: A masterful depiction of life in the ghetto and the demands of heroism. The conclusion, although inevitable, is devastating * The Times *
Harrowing, comic and deeply human . . . This book needs to be read * Anthony Doerr *

Jim Shepard is the National Book Award-finalist and highly acclaimed author of seven novels and five collections of stories, including The Book of Aron and Like You'd Understand, Anyway. He lives in Massachusetts with his family and teaches creative writing at the historic liberal arts establishment Williams College. Widely acclaimed as one of the US's finest writers, The World to Come is the first collection of his short stories to be published in the UK.

GOR007184808
The Book of Aron by Jim Shepard
Jim Shepard
Used - Very Good
Paperback
Quercus Publishing
2015-05-07
256
1848667396
9781848667396
N/A
Book picture is for illustrative purposes only, actual binding, cover or edition may vary.
This is a used book - there is no escaping the fact it has been read by someone else and it will show signs of wear and previous use. Overall we expect it to be in very good condition, but if you are not entirely satisfied please get in touch with us.