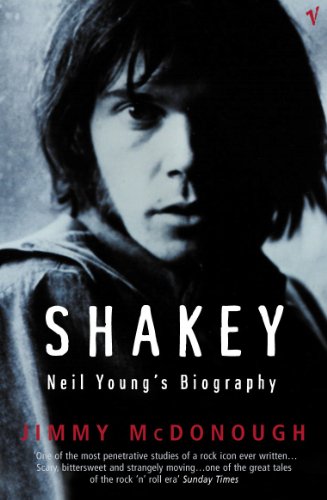 Out of Stock
Neil Young is one of rock and roll's most important, influential and enigmatic figures, an intensely reticent artist who has granted no writer access to his inner sanctum - until now.
Very Good
Only 0 left

Neil Young is one of rock and roll's most important, influential and enigmatic figures, an intensely reticent artist who has granted no writer access to his inner sanctum - until now. Shakey is the whole story of Young's incredible life and career: from his childhood in Canada to the founding of folk-rock pioneers Buffalo Springfield; the bleary conglomeration of Crazy Horse and the monstrous success of Crosby, Stills, Nash and Young; to the depths of the Tonight's the Night depravity and the Geffen years; and Young's unprecedented nineties 'comeback'. Shakey (the title refers to one of Young's many aliases) is also the compelling human story of a lonely kid for whom music was the only outlet, a driven yet tortured figure who controlled his epilepsy via 'mind over matter', an oddly passionate model train mogul who, inspired by his own son's struggle with cerebral palsy, became a major activist in the quest to help those with the condition. This long-awaited, unprecedented story of a rock 'n' roll legend is uniquely told through the interwoven voices of McDonough - biographer, critic, historian, obsessive fan - and the ever-cantankerous (but slyly funny) Young himself.

"The raw materials of the story are sensational: burning ambition, clashing egos, onstage epileptic seizures, deranged groupies, great albums, the birth and death of Sixties idealism, and, most of all, extremes of substance abuse" * Scotland on Sunday *
"Succeeds in stripping a star of his iconography - McDonough's book excels at anecdotes of music excess from a bygone era" * Observer *
"It's hard to imagine anyone trying to better this book - It has an abundance of what Young values above all else - passion" * Evening Standard *
"I've been reading this biography of Neil Young called Shakey and it's changed my life, man" -- Liam Gallagher * NME *

Jimmy McDonough is a journalist who has contributed to such publications as Variety, Film Comment, Mojo, Spin and Juggs. But he is perhaps best know for his intense, definitive Village Voice profiles of such artists as Jimmy Scott, Neil Young and Hubert Selby, Jr. He is also the author of The Ghastly One: The Sex-Gore Netherworld of Filmmaker Andy Milligan. He lives in the Pacific Northwest.

GOR001162949
Shakey: Neil Young's Biography by Jimmy McDonough
Jimmy McDonough
Used - Very Good
Paperback
Vintage Publishing
2003-02-06
800
0099443589
9780099443582
N/A
Book picture is for illustrative purposes only, actual binding, cover or edition may vary.
This is a used book - there is no escaping the fact it has been read by someone else and it will show signs of wear and previous use. Overall we expect it to be in very good condition, but if you are not entirely satisfied please get in touch with us.