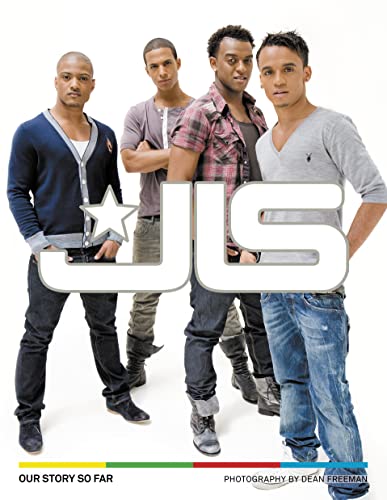 Hot new boy band JLS welcome you to their world

JLS: Our Story so Far by JLS

Hot new boy band JLS welcome you to their world

Follow the hottest new pop act on their rollercoaster ride to fame...

Since their huge success on The X Factor and The X Factor finalists tour, JLS are well on their way to becoming one of the biggest boy bands the UK has ever seen - The X Factor final last Christmas drew a record 15 million viewers. During the final stages of the show legions of teenage fans, dressed in the trademark JLS colours, flocked to see them perform in South London, resulting in the need for crowd control and massive national press attention. The JLS colours, Aston - blue, Oritse - red, Marvin - green and JB - yellow, have been enthusiastically adopted by fans and a sea of JLS tops greeted the band when they travelled the country on the X Factor finalists tour.

In their very first book, Aston, Oritse, Marvin and JB each tell the story of their amazing journey from X Factor hopefuls to pop smashes. Beautifully designed, the book contains 125 exclusive never-before-seen photographs of the band including sexy portraits and captured private moments which can't fail to excite the thousands of loyal JLS fans.

With their first single a massive number 1 seller and their first album due in October, 2009 looks set to be the year of JLS!

JLS comprise of Aston Merrygold, 21, Marvin Humes, 24, Jonathan "JB" Gill, 22 and Oritse Williams, 22. Formed in 2007 JLS hit the headlines as they became the first band to reach The X Factor finals. This is their first book.

GOR001923988
9780007328635
000732863X
JLS: Our Story so Far by JLS
JLS
Used - Very Good
Hardback
HarperCollins Publishers
2009-09-03
224
N/A
Book picture is for illustrative purposes only, actual binding, cover or edition may vary.
This is a used book - there is no escaping the fact it has been read by someone else and it will show signs of wear and previous use. Overall we expect it to be in very good condition, but if you are not entirely satisfied please get in touch with us
Trustpilot