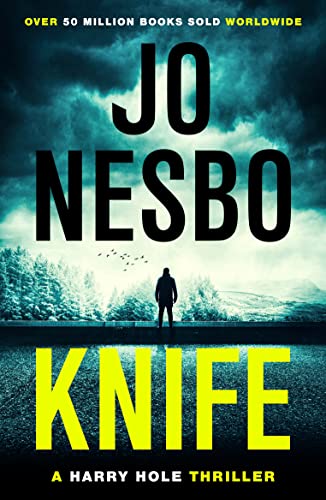 Featured in The Times top ten crime novels of the decade

**THE No.1 SUNDAY TIMES BESTSELLER**

'This is the king of Norwegian crime on top form' Observer

HARRY HOLE'S DEADLIEST ENEMY IS BACK... AND OUT FOR BLOOD

Harry is in a bad place: Rakel has left him, he's working cold cases and notorious murderer Svein Finne is back on the streets.

THE FIRST KILLER HARRY PUT BEHIND BARS IS OUT TO GET HIM.

Harry is responsible for the many years Finne spent in prison but now he's free and ready to pick up where he left off.

When Harry wakes up with blood on his hands, and no memory of what he did the night before, he knows everything is only going to get worse...

[Knife] may be Nesbo's best storytelling yet. It's not just clever; it's diabolical, and let's be glad it is, because the corkscrewing plot provides a measure of relief from the pain on view in this uncompromisingly intense and brilliant novel * Booklist *
Knife shows Nesbo back on form... This is a police procedural that breaks the bounds of the format with abandon... Nesbo manhandles the reader into contented...submission * Financial Times *
Knife sees the return of Harry's old nemesis Svein Finne... The plot never goes the way you think it will, as Nesbo delights in playing tricks on the reader * Mail on Sunday *
This is Scandi noir as dark as obsidian with an emotional wreck of a protagonist * i *
You can imagine the worst (and you will probably be right), but the brilliant Jo Nesbo will surprise you anyway. Knife is the most unpredictable novel in the [Harry Hole] series * Forbes, Russia *

Jo Nesbo is one of the world's bestselling crime writers, with The Leopard, Phantom, Police, The Son, The Thirst and Knife all topping the Sunday Times bestseller charts. He's an international number one bestseller and his books are published in 50 languages, selling over 45 million copies around the world.

Before becoming a crime writer, Nesbo played football for Norway's premier league team Molde, but his dream of playing professionally for Spurs was dashed when he tore ligaments in his knee at the age of eighteen. After three years military service he attended business school and formed the band Di Derre ('Them There'). They topped the charts in Norway, but Nesbo continued working as a financial analyst, crunching numbers during the day and gigging at night. When commissioned by a publisher to write a memoir about life on the road with his band, he instead came up with the plot for his first Harry Hole crime novel, The Bat.

GOR010299367
Knife: (Harry Hole 12) by Jo Nesbo
Jo Nesbo
Harry Hole
Used - Very Good
Paperback
Vintage Publishing
2020-01-23
640
1784709085
9781784709082
N/A
Book picture is for illustrative purposes only, actual binding, cover or edition may vary.
This is a used book - there is no escaping the fact it has been read by someone else and it will show signs of wear and previous use. Overall we expect it to be in very good condition, but if you are not entirely satisfied please get in touch with us.