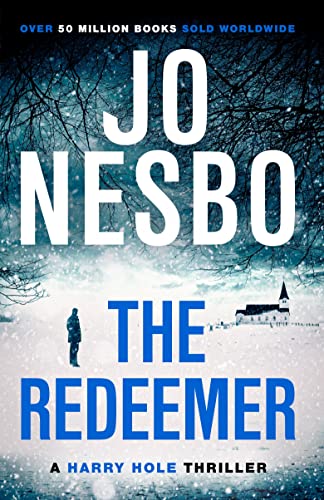 The Redeemer
by Jo Nesbo

Harry Hole returns in a pulse-pounding thriller like no other.

Christmas shoppers have gathered to listen to a Salvation Army carol concert.

Harry Hole returns in a pulse-pounding thriller like no other.

Christmas shoppers have gathered to listen to a Salvation Army carol concert. Then a shot rings out and one of the singers falls to the floor, dead.

Detective Harry Hole and his team are called in to investigate but have little to work with - there is no immediate suspect, no weapon and no motive. But when the assassin discovers he's shot the wrong man, Harry finds his troubles have only just begun.

Now the clock is ticking before he kills again

*Watch out for Knife, the new Harry Hole thriller, out now*

The Redeemer rocks! Jo Nesbo is my new favorite thriller writer and Harry Hole my new hero. This book had my pulse in the red zone from start to finish * Michael Connelly *
Nesbo is in a class of his own * Evening Standard *
Terrific shocks, tension and atmosphere * The Times *
Nesbo's fourth novel [and it] proves to be as brilliant as his other three...grimly realistic...an engrossing mystery * The Scotsman *
Even when you're positive that the mystery is entirely done and dusted, it invariably turns out that the pragmatic Detective Harry Hole has managed to stay three steps ahead and there's more to uncover * Time Out *

Jo Nesbo is one of the world's bestselling crime writers, with The Leopard, Phantom, Police, The Son, The Thirst and Knife all topping the Sunday Times bestseller charts. He's an international number one bestseller and his books are published in 50 languages, selling over 45 million copies around the world.

Before becoming a crime writer, Nesbo played football for Norway's premier league team Molde, but his dream of playing professionally for Spurs was dashed when he tore ligaments in his knee at the age of eighteen. After three years military service he attended business school and formed the band Di Derre ('Them There'). They topped the charts in Norway, but Nesbo continued working as a financial analyst, crunching numbers during the day and gigging at night. When commissioned by a publisher to write a memoir about life on the road with his band, he instead came up with the plot for his first Harry Hole crime novel, The Bat.

Sign up to the Jo Nesbo newsletter for all the latest news: jonesbo.com/newsletter

GOR007128638
The Redeemer: Harry Hole 6 by Jo Nesbo
Jo Nesbo
Harry Hole
Used - Very Good
Paperback
Vintage Publishing
2015-11-19
592
1784703176
9781784703172
N/A
Book picture is for illustrative purposes only, actual binding, cover or edition may vary.
This is a used book - there is no escaping the fact it has been read by someone else and it will show signs of wear and previous use. Overall we expect it to be in very good condition, but if you are not entirely satisfied please get in touch with us.