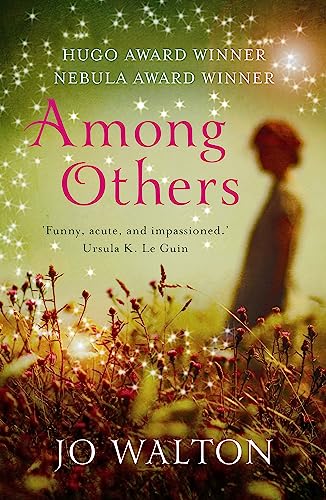 Among Others
by Jo Walton

Used Price
£5.19
New RRP £8.99
Free Shipping in the UK
Fifteen-year-old Morwenna lives in Wales with her twin sister and a mother who spins dark magic for ill. One day, Mori and her mother fight a powerful, magical battle that kills her sister and leaves Mori crippled. Devastated, Mori flees to her long-lost father in England.
Reviews:
Trustpilot
Very Good Good Well Read

Among Others by Jo Walton

'It doesn't matter. I have books, new books, and I can bear anything as long as there are books.'

Fifteen-year-old Morwenna lives in Wales with her twin sister and a mother who spins dark magic for ill. One day, Mori and her mother fight a powerful, magical battle that kills her sister and leaves Mori crippled. Devastated, Mori flees to her long-lost father in England. Adrift, outcast at boarding school, Mori retreats into the worlds she knows best: her magic and her books. She works a spell to meet kindred souls and continues to devour every fantasy and science fiction novel she can lay her hands on. But danger lurks... She knows her mother is looking for her and that when she finds her, there will be no escape.

Customer Reviews - Among Others

Among Others is a wonder and a joy. * Jeff Vandermeer, New York Times *
If you love SF and fantasy, if reading it formed your teen years, if you do remember the magic you used to do, if you remember the absolute joy of first discovering those books, then read this. -- Robin Hobb
Funny, acute, and impassioned -- Ursula K. Le Guin
A hymnal for the clever and odd - an inspiration and a lifeline to anyone who has ever felt in the world, but not of it. * Cory Doctorow *
Most fantasies evade opportunities to make the impossible plausible, to give magic accountability in a realistic setting and moral and emotional weight in a modern novel. Jo Walton accepts the double challenge and meets it with courage and skill . . . Among Others is a funny, thoughtful, acute and absorbing story all the way through, but in the magic parts it is more than that. -- Ursula K. Le Guin * Guardian *
Possibly earning itself the Book of the Year title is Jo Walton's thought provoking Among Others, which stays with you for a long time after reading. It is the story of a young girl from a magical family who is sent to a mundane boarding school and, through her discovery of classic SF novels, has her mind and world expanded. * Independent on Sunday *
A lovely story, unlike anything I've ever read before: funny, touching, and gently magical. -- Patrick Rothfuss
There are the books you want to give all your friends, and there are the books you wish you could go back and give your younger self. And then there's the rare book, like Jo Walton's Among Others, that's both. * io9.com *
Among Others is about a young girl brought up in a magical family who is sent to a mundane, non-magical school; a captivatingly told mirror image of Harry Potter. * The Guardian *
I don't believe I've seen, either in fiction or in memoir, as brilliant and tone-perfect an account of what discovering SF and fantasy can mean to its young readers... Remarkable. -- Gary K. Wolfe * Locus *

Beautifully crafted... Among Others calls to those who desire a wild, magical world in place of the one they have but eventually learn that their own lives are the greatest story of all.

* Bloomsbury Review *
Compelling... Never deigning to transcend the genre to which it is clearly a love letter, this outstanding (and entirely teen-appropriate) tale draws its strength from a solid foundation of sense-of-wonder and what-if. * Publishers Weekly, starred review *

Jo Walton writes science fiction and fantasy novels and reads a lot and eats great food. It worries her slightly that this is so exactly what she always wanted to do when she grew up. She comes from Wales, but lives in Montreal.

GOR004643297
Among Others by Jo Walton
Jo Walton
Used - Very Good
Paperback
Little, Brown Book Group
2013-03-21
416
1472106539
9781472106537
N/A
Book picture is for illustrative purposes only, actual binding, cover or edition may vary.
This is a used book - there is no escaping the fact it has been read by someone else and it will show signs of wear and previous use. Overall we expect it to be in very good condition, but if you are not entirely satisfied please get in touch with us.