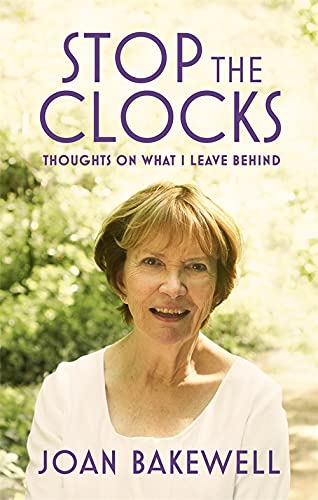 Stop the Clocks
by Joan Bakewell

In Stock
£2.69
Now in her eighties, one of Britain's finest and most spirited women looks back on her life.
Very Good Good
7 in stock

Stop the Clocks: Thoughts on What I Leave Behind by Joan Bakewell

Joan Bakewell has led a varied, sometimes breathless life: she has been a teacher, copywriter, studio manager, broadcaster, journalist, the government's Voice of Older People and chair of the theatre company Shared Experience. She has written four radio plays, two novels and an autobiography -- The Centre of The Bed. Now in her 80s, she is still broadcasting. Though it may look as though she is now part of the establishment - a Dame, President of Birkbeck College, a Member of the House of Lords as Baroness Bakewell of Stockport - she's anything but and remains outspoken and courageous. In Stop the Clocks, she muses on all she has lived through, how the world has changed and considers the things and values she will be leaving behind.

Stop the Clocks is a book of musings, a look back at what she was given by her family, at the times in which she grew up - ranging from the minutiae of life such as the knowledge of how to darn and how to make a bed properly with hospital corners, to the bigger lessons of politics, of lovers, of betrayal. She talks of the present, of her family, of friends and literature - and talks too of what she will leave behind. This is a thoughtful, moving and spirited book as only could be expected from this extraordinary woman.

[Joan Bakewell's] new book is a joy * Psychologies *
A wry analysis of the world she will leave -- Rachel Cooke * Observer *
Heartfelt and fiendishly smart * Sunday Telegraph *
Companionable and insightful . . . by turns entertaining, frank and - when dealing with death and loss - unflinching. It is, then, true to the spirit of a most accomplished woman, who has always had the knack of making whatever she does look easy. When it comes to facing down old age with such style and honesty, that is perhaps the most impressive achievement of all * Herald *
She writes as sensitively as George Orwell . . . Bakewell is an advertisement for active survival . . . long live life, say I, if it produces books as brave as these -- John Sutherland * New Statesman *
What makes Bakewell so thoroughly engaging is her ongoing thirst for knowledge . . . Bakewell has added an elegant and elegiac pause to the many things already left behind -- Cary Gee * Tribune *
Warm, insightful and always entertaining, Bakewell reflects on her upbringing, her politics, her friendships, her affair with Harold Pinter and contemplates what she will leave behind * Daily Express *

Joan Bakewell has had a fifty year career in broadcasting and is still at it. Born in Stockport, graduated in Cambridge, she has published an autobiography, The Centre of the Bed, and two novels: All the Nice Girls and She's Leaving Home. She has two children, six grandchildren, and sits in the House of Lords as a Labour Peer. She lives in North London.

GOR008214640
Stop the Clocks: Thoughts on What I Leave Behind by Joan Bakewell
Joan Bakewell
Used - Very Good
Paperback
Little, Brown Book Group
2017-02-28
304
0349006113
9780349006116
N/A
Book picture is for illustrative purposes only, actual binding, cover or edition may vary.
This is a used book - there is no escaping the fact it has been read by someone else and it will show signs of wear and previous use. Overall we expect it to be in very good condition, but if you are not entirely satisfied please get in touch with us.