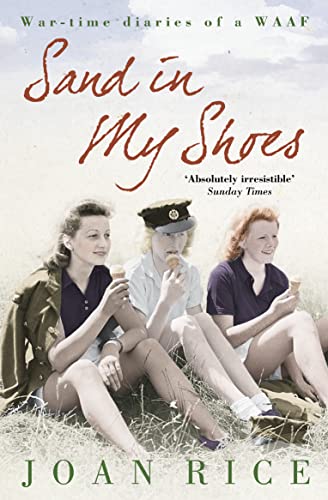 Sand In My Shoes
by Joan Rice

A moving and personal account of a young woman's experiences of the Second World War from the mother of Sir Tim Rice.

Sand In My Shoes Summary

Sand In My Shoes: Coming of Age in the Second World War: A WAAF's Diary by Joan Rice

A moving and personal account of a young woman's experiences of the Second World War from the mother of Sir Tim Rice.

Joan Rice had the same ambitions as many young women of her generation: she wanted to write; wanted to travel; wanted to be famous. With the outbreak of World War II she hurried to enlist - aged 20 - in the Women's Auxillary Air Force, hoping for change, for adventure, and for the chance to 'swank around in uniform'.

Throughout the early years of the conflict she kept a regular diary of her life as a WAAF. Working first at RAF Hendon, she soon moved to a job in British Intelligence, and ultimately to postings in Egypt and Palestine. She witnessed the 'phoney war' explode into the Battle of Britain, lived through the London Blitz and was forced by Rommell's advance to flee Cairo. But her diary also tells the story of everyday war life, of the social whirl of service society and of her very first encounter with the man who would become her husband.

`Sand in my Shoes' is a compelling first-hand account of life and love in a defeated Europe. Written with flair and exuberance, Joan's story has lain untouched for some fifty years. Incorporating additional material from her husband's own notes, her diary is a testament to the many women who kept the RAF in the air.

Sand In My Shoes Reviews

'What makes the book so special is its wonderful candour about love...it's a gem.' Country Life

'Love, sweets, cafes, bread, cold baths, boredom, buttons, bombs, bars for meeting, RAF pilots for dancing, heartache, sorrow, as Joan Rice works to identify enemy planes and blisses out in a troopship to Cairo. A clever English girl watches herself grow up in wartime in her truth-telling, brave, whirling, wonderful diary.' Xandra Bingley, author of `Bertie, May and Mrs Fish'

'I read it in one go and was fascinated by Joan's radar-like observation and wit. What a fantastic find for any grandchild: a slice of a life and a slice of history all in one go.' Roberta Taylor

Joan Rice was born in 1919. Leaving school at seventeen, she worked as a secretary until the outbreak of World War II, when she joined the Women's Auxiliary Air Force. She met her husband in Cairo, and after serving in England, Africa and the Middle East, returned home to give birth to her first son. She now lives in Hertfordshire

GOR000387414
Sand In My Shoes: Coming of Age in the Second World War: A WAAF's Diary by Joan Rice
Joan Rice
Used - Very Good
Paperback
HarperCollins Publishers
2007-07-02
400
000722821X
9780007228218
N/A
Book picture is for illustrative purposes only, actual binding, cover or edition may vary.
This is a used book - there is no escaping the fact it has been read by someone else and it will show signs of wear and previous use. Overall we expect it to be in very good condition, but if you are not entirely satisfied please get in touch with us.