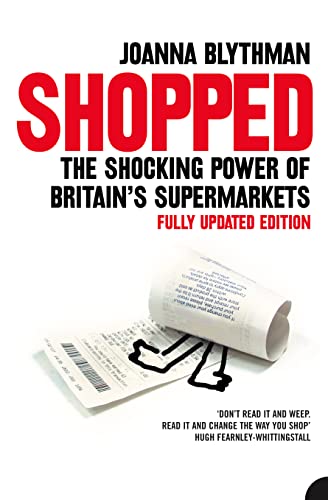 An elegant demolition of the supermarket miracle, this book charts the impact that supermarkets have had on every aspect of our lives and culture.

Shopped: The Shocking Power of British Supermarkets by Joanna Blythman

An elegant demolition of the supermarket miracle, this book charts the impact that supermarkets have had on every aspect of our lives and culture.

* Supermarkets instill a climate of fear amongst their suppliers?

* Every time a supermarket opens the local community loses on average 276 jobs?

In the 1970s, British supermarkets had only 10% of the UK's grocery spend. Now they swallow up 80%, influencing how we shop, what we eat, how we spend our leisure time, how much rubbish we generate, even the very look of our physical environment.

Award-winning food writer Joanna Blythman investigates the enormous impact that these big box retailers are having on our lives. She meets the farmers who are selling food to supermarkets for less than they need to survive and the wholesalers who have been eliminated from the supply chain; she travels to suburban retail parks to meet the teenagers and part-timers who stack our shelves and reveals the hoops third world suppliers must jump through to earn supermarket contracts.

This thought-provoking, witty and sometimes chilling voyage of discovery is sure to make you think twice before you enthusiastically reach for that supermarket trolley again.

She probably knows more than anyone else about where our food comes from.' Nigel Slater

'Joanna Blythman has bravely and compellingly exposed the corrosive effect of supermarkets on our farming and our food culture. And she has rightly identified you, the consumer, as the only person who can do anything about it. Don't read it and weep. Read it and change the way you shop.'
Hugh Fearnley-Whittingstall

'Shocking and powerful' The Guardian

'She'll fire you up with a righteous fervour that may last beyond your return to the mainland.' The Times

Joanna Blythman is Britain's leading investigative food journalist and an influential commentator on the British food chain. She has won five Glenfiddich awards for her writing, including a Glenfiddich Special Award for her first book, `The Food We Eat', a Caroline Walker Media Award for 'Improving the Nation's Health by Means of Good Food', and a Guild of Food Writers Award for `The Food We Eat'. In 2004, she won the prestigious Derek Cooper Award, one of BBC Radio 4's Food and Farming Awards. In 2007, Good Housekeeping Magazine gave her its award for Outstanding Contribution to Food Award 2007. She has also written three other groundbreaking books, `How to Avoid GM Food', `The Food Our Children Eat' and'Bad Food Britain'. She writes and broadcasts frequently on food issues.

GOR001204460
Shopped: The Shocking Power of British Supermarkets by Joanna Blythman
Joanna Blythman
Used - Very Good
Paperback
HarperCollins Publishers
2005-03-30
400
0007158041
9780007158041
Winner of Glenfiddich Awards: Food Book of the Year 2005
Book picture is for illustrative purposes only, actual binding, cover or edition may vary.
This is a used book - there is no escaping the fact it has been read by someone else and it will show signs of wear and previous use. Overall we expect it to be in very good condition, but if you are not entirely satisfied please get in touch with us.