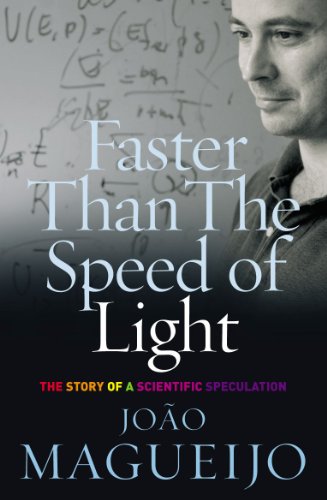 Faster Than The Speed Of Light
by Joao Magueijo

In Stock
£5.99
The idea that the speed of light is a constant - at 186,000 miles per second - is one of the few scientific facts that almost everyone knows.
Very Good Good Well Read
Only 4 left

Faster Than The Speed Of Light Summary

Faster Than The Speed Of Light: The Story of a Scientific Speculation by Joao Magueijo

The idea that the speed of light is a constant - at 186,000 miles per second - is one of the few scientific facts that almost everyone knows. That constant - c- also appears in the most famous of all scientific equations: e=mc2- Yet over the last few years, a small group of highly reputable young physicists have suggested that the central dogma of modern physics may not be an absolute truth - light may have moved faster in the earlier life of the universe, it may still be moving at different speeds elsewhere today. In telling the story of this heresy, and its gradual journey towards acceptance, Joao Magueijo writes as one of the three central figures in the story, introducing the reader to modern cosmology, to the implications of VSL (variable speed of light) and to the world of physicists. The initial rejection of Magueijo's ideas is beginning to give way to a reluctant acceptance that the young men may have a point - only the next few years will tell the final fate of this 'dangerous' idea.

Faster Than The Speed Of Light Reviews

"Magueijo tells the story...with passion and considerable verve, familiarising his readers with some of the hippiest ideas in modern science." * The Observer *
"For its lucidity and persuasiveness, Joao Magueijo's book on cosmological thinking stands comparison with Simon Singh's Fermat's Last Theorem- a hip, raucous, hot-blooded, bilious and altogether bewitching expose of real science from the inside." * Daily Telegraph *
"A highly readable account of the problems besetting modern cosmology and how they appear to be resolved by [his theory]. Better still, he gives an honest and revealing insight into what it's like to carry out scientific research" * Guardian *
"Like many of the best popular science books, this is not so much a definitive statement as a thrilling report from the front. There hasn't been a writer about science this bolshy since the young James Watson- Fascinating" * Time Out *

Born in Portugal and educated at the universities of Lisbon and Cambridge, Joao Magueijo (pronounced 'zhwow magwayzhoo) is Reader in Theoretical Physics at Imperial College, London, where he was for three years a Royal Society Research Fellow. He has been a visiting researcher at the University of California at Berkeley and Princeton University, and received his doctorate in Theoretical Physics at Cambridge. Faster than the Speed of Light is his first book.

GOR001114675
Faster Than The Speed Of Light: The Story of a Scientific Speculation by Joao Magueijo
Joao Magueijo
Used - Very Good
Paperback
Cornerstone
2004-01-01
288
0099428083
9780099428084
N/A
Book picture is for illustrative purposes only, actual binding, cover or edition may vary.
This is a used book - there is no escaping the fact it has been read by someone else and it will show signs of wear and previous use. Overall we expect it to be in very good condition, but if you are not entirely satisfied please get in touch with us.