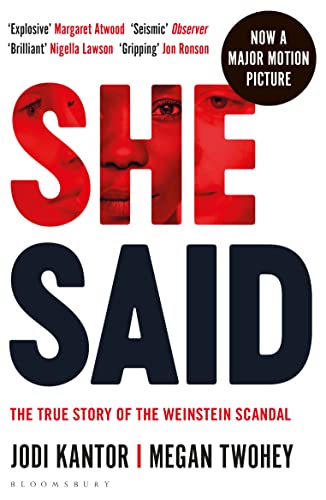 She Said
by Jodi Kantor

She Said: The New York Times bestseller from the journalists who broke the Harvey Weinstein story by Jodi Kantor

'Explosive' Margaret Atwood 'Seismic' Observer 'Brilliant' Nigella Lawson 'Gripping' Jon Ronson A FINANCIAL TIMES, NEW STATESMAN, DAILY TELEGRAPH, METRO AND ELLE BOOK OF THE YEAR On 5 October 2017, the New York Times published an article by Jodi Kantor and Megan Twohey that helped change the world. Hollywood was talking as never before. Kantor and Twohey outmanoeuvred Harvey Weinstein, his team of defenders and private investigators, convincing some of the most famous women in the world - and some unknown ones - to go on the record. Three years later, it helped lead to his conviction. This is how they did it.

Seismic. Examines what happens when a bully is cornered * Observer *
A binge-read of a book, propelled by a clear, adrenaline-spiking tick-tock * Los Angeles Times *
The narrative speeds towards the moment when the story that Weinstein can't stop detonates with shattering force . . . Feels like a Hollywood film in the making * Daily Telegraph *
She Said is a fascinating tale of investigative journalism in action, the ultimate story-behind-the-story filled with so many twists and obstacles that it often reads like a Hollywood screenplay * Evening Standard *
Cinematic, remarkable . . . A much deeper story than the one that seized headlines * Guardian *
She Said is not a lurid celebrity expose, nor even a dark farce, but a cool, just-the-facts-ma'am account of how Kantor and Twohey uncovered the horror story that ignited the MeToo movement * The Times *
Seamless and suspenseful . . . A gripping blow-by-blow * New York Times *
Has the morally satisfying arc of a thriller, with all the suspense, a clear dynamic of right and wrong, and partial justice at the end * i *
The groundbreaking new book that tells the true story of the Harvey Weinstein scandal. With plenty of unknown material and new discoveries, She Said serves as a testament to the importance of journalism and how facts can drive social change in an age of fake news * Stylist *
Captivating. The cumulative effect is almost cinematic, a sort of All the President's Men for the #MeToo era, except the men are women, and they don't protect the boss, they take him down * Washington Post *
She Said is first and foremost an account of incredible reporting. Kantor and Twohey show the background research they ran on sources, to protect both them and the paper, the careful way they documented and substantiated information, and their extraordinary precision in acquiring proof. We know how the story ends, but She Said is nonetheless deeply suspenseful, a kind of less swaggering All the President's Men * NPR *
Painstakingly researched, their account is less interested in Weinstein the monster than the structures that enabled him to flourish. A hymn to old-fashioned investigative reporting * Guardian *
It reads like a thriller. It's incredible the work they've done. It staggered me. I could talk all day about this book. It's about so much more than Harvey Weinstein -- Pandora Sykes
For decades Hollywood has whispered about Harvey Weinstein. Journalists sniffed around, but none ever could - or, perhaps, would - bring one of the industry's darkest and longest-kept secrets to light. Until Jodi Kantor and Megan Twohey delivered a chilling expose ... It sent shockwaves * Marie Claire *
It's not often that you can pinpoint the beginning of such a momentous cultural shift, but in this case you can draw a pretty clear line to the stories by Meghan Twohey and Jodi Kantor * Glamour *
A compelling account of serious investigative journalism. Riveting -- Helena Kennedy QC, author of 'Eve Was Shamed'
What an inspiring and gripping story. I could not put it down -- Jessica Ashworth
I hope this book will go a long way to exonerating me and the other victims who've dealt with slander and mental assault for years now -- Rose McGowan
I can't put it down. The ins and outs of how they broke this story are riveting and the respect they show for their sources is beautiful -- Shonda Rimes
Superb reporting. Unputdownable non-fiction. A powerful book -- Reni Eddo-Lodge
For years, the showbiz world has asked why Gwyneth Paltrow stayed silent about the man who helped her win as Oscar - but once made advances to her. Now, a new book reveals the extraordinary truth. She Said sheds a revealing light on the closest and most successful producer-actor partnership for decades * Daily Mail *
An explosive new book chronicling the downfall of Harvey Weinstein. Since the release of She Said, Weinstein's lawyers have hit back, and he has denied all previous allegations. One thing is clear, though: thanks to a thorough investigation, Weinstein's victims will no longer be silenced * Grazia *
Can a book feel important AND be a page-turner? Yes! This one! What a read. Edge of my seat plus I feel smarter about investigative journalism at its finest -- Mindy Kaling

Jodi Kantor and Megan Twohey are investigative reporters at the New York Times, where their reporting on women, children and the workplace has changed laws and informed our culture. They share numerous honours for breaking the Harvey Weinstein story, including the Pulitzer Prize for Public Service, journalism's highest accolade.

NGR9781526603265
She Said: The New York Times bestseller from the journalists who broke the Harvey Weinstein story by Jodi Kantor
Jodi Kantor
New
Paperback
Bloomsbury Publishing PLC
2020-06-30
320
1526603268
9781526603265
N/A
Book picture is for illustrative purposes only, actual binding, cover or edition may vary.
This is a new book - be the first to read this copy. With untouched pages and a perfect binding, your brand new copy is ready to be opened for the first time.