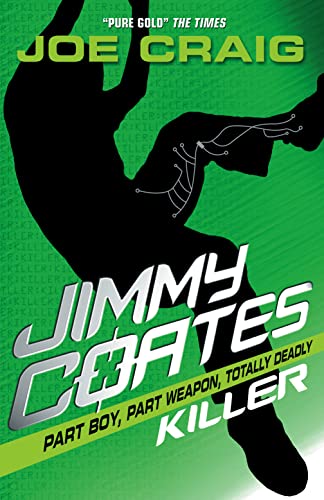 An eleven-year-old boy discovers he has strange powers, and a future that holds mystery, adventure - and death!

An eleven-year-old boy discovers he has strange powers, and a future that holds mystery, adventure - and death!

Bending his knees, Jimmy let go of the windowsill and slowly tipped backwards. Surely this is impossible, he thought, even as he could feel himself doing it. He pushed out with his legs and the thrust sent him flying backwards into the air... Then his fingers locked on to the cold wire of the fence, poised in a perfect handstand on the top.

Who are the mysterious men chasing Jimmy across the city?
Why are they after him?
What are Jimmy's parents keeping from him and who can he trust?
And how come he can suddenly do all this really cool stuff...?

Find out in this electrifying debut novel from Joe Craig. Young, multitalented and brimming with ideas, this new HarperCollins author is destined to become a firm favourite with children everywhere.

"Boys love this stuff, and so do girls. Jimmy is a pint-sized verision of Robocop or Terminator... Like Anthony Horowitz's splendid fantasies, [these novels] tap into almost everything a bolshy boy wants and feels. Immensely clever, immediately engaging, they will prepare a child for Orwell and Huxley." Amanda Craig, The Times

"Fast-paced and intelligently written." The Bookseller

"the sort of book to wow reluctant boy readers away from computer games and into the pages of a book." Books for Keeps

"With cinematic skill, Craig unrolls a series of action-packed scenes, with a new crisis at every turn of the page. It's gripping, but not mindless" Angela Kilverstein

"...a totally excellent adventure - a lit bit Bond, a lit bit Matrix and a lot of what you've never read before. Someone make this into a movie!" Flipside

"The perfect primer to the Bourne series by Robert Ludlum." VOYA

Joe studied Philosophy at Cambridge University, graduating in 2002. While there he wrote and performed with the Cambridge Footlights and co-hosted a show on the University radio station. As well as being a writer, he is a songwriter and musician. He has performed as a singer/songwriter at various venues in London, and made a self-produced CD of his pop material. (You can hear the songs through his website.)

GOR000975533
Jimmy Coates: Killer by Joe Craig
Joe Craig
Used - Very Good
Paperback
HarperCollins Publishers
2005-04-04
304
0007196857
9780007196852
N/A
Book picture is for illustrative purposes only, actual binding, cover or edition may vary.
This is a used book - there is no escaping the fact it has been read by someone else and it will show signs of wear and previous use. Overall we expect it to be in very good condition, but if you are not entirely satisfied please get in touch with us.