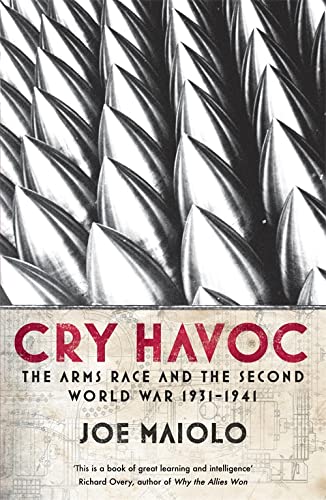 The arms race, on the run up to the Second World War, followed the faultless logic of paranoia. Before the First World War, the Great Powers measured the strength of their rivals by comparing the size of armies and navies, and the money spent on them. Afterwards, having learned the lessons of 'total war', they looked at the capacity of nations to mobilise their economies and populations for war. Deep planning, they realised, was necessary to prepare for potential conflicts; but with this attitude came a sense that society might need to be in a state of perpetual readiness for conflict, and a potential openness to totalitarian levels of state control in ensuring that readiness.

In Cry Havoc Joe Maiolo shows, in rich and fascinating detail, how the arms race between the Great Powers developed. Where previous histories have looked at how individual nations responded to the challenges of the time, Maiolo reveals the full complexity of the arms race by looking at competition between nations, at how nations reacted to the moves of their rivals. Maiolo provides a vivid portrait of the thinking of those making the key decisions - of the thinking of Hitler, Mussolini, Chamberlain, Stalin, Roosevelt - and reveals the full extent of the dilemmas confronted by the leaders of the western democracies, who seemed at times to be faced with a choice between defending their nations and preserving the essential democratic nature of the societies they sought to defend. Cry Havoc is an absorbing account of a time of extreme tensions, showing how the deadly game of the arms race led, ultimately, to an unleashing of the dogs of war.

A compelling read . . . While this is an academically informed book, Maiolo's skill rests in his ability to distil complex, and at times technical subjects, into a very readable prose . . . * History Today *
Provocative . . . A fruitful, timely work in an era of ever-increasing military spending * Kirkus Reviews *
This is a book of great learning and intelligence * Richard Overy, author of Why the Allies Won *
Joe Maiolo has taken one of the most studied periods in international history and managed to find a completely new angle * Professor Sir Lawrence Freedman, KCL *
As I am an old (critical) fan of A.J.P. Taylor's The Origins of the Second World War, it is great to read a replacement volume, written by Maiolo in the same trenchant manner, with the same refusal to endorse cliched interpretations and with more determination to ensure accuracy than its predecessor * Richard Bosworth, Times Higher Education Supplement *
A fascinating, well-researched and, surprisingly, innovative study * WWII History magazine *

After serving in the Canadian Army, Dr Maiolo completed a PhD at the London School of Economics. He currently lectures in military history at Kings College London.

GOR003618772
Cry Havoc: The Arms Race and the Second World War, 1931-41 by Joe Maiolo
Joe Maiolo
Used - Good
Paperback
Hodder & Stoughton General Division
2011-03-03
480
0719565200
9780719565205
N/A
Book picture is for illustrative purposes only, actual binding, cover or edition may vary.
This is a used book - there is no escaping the fact it has been read by someone else and it will show signs of wear and previous use. Overall we expect it to be in very good condition, but if you are not entirely satisfied please get in touch with us.