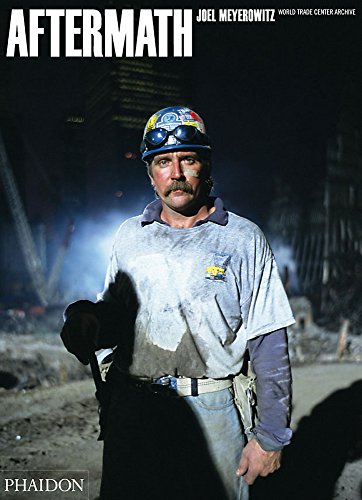 After the destruction of the World Trade Center in New York on September 11th 2001, the world-renowned photographer Joel Meyerowitz felt compelled to visit the site, to document and record the aftermath of the largest ever attack on US soil. Although initially turned away by police (on the grounds that the site was a crime scene and could not be photographed), Meyerowitz was determined to gain access to the area.

Within days he had established strong links with many of the firefighters, policemen and construction workers contributing to the clean up. With their assistance he became the only photographer to be granted unimpeded access to Ground Zero. Once there he systematically began to document the wreckage followed by the necessary demolition, excavation and removal of tens of thousands of tonnes of debris that would transform the site from one of total devastation to level ground. Soon after the Museum of the City of New York officially engaged Meyerowitz to create an archive of the destruction and recovery at Ground Zero and the immediate neighborhood. The 9/11 Photographic Archive numbers in excess of 5,000 images and will become part of the permanent collections of the Museum of the City of New York.

"An important tribute to the courage and determination exhibited by New Yorkers in the weeks and months following 9/11."-Michael Bloomberg, Mayor of New York City

"Aftermath is a testament to the heroism and compassion that were so much a part of the recovery efforts at ground zero."-Joe Daniels, President, National September 11 Memorial & Museum

"Meyerowitz has created an archive that is both a work of history and of art."-Booklist

"Magnificent... It is for our children and our grandchildren-for the historical record-that Meyerowitz zealously labored over many months to capture on film the aftermath."-John Updike, The New York Review of Books

Born in 1938 in New York City, Meyerowitz went to Ohio to study painting and medical drawing at the State University but moved back to New York to work in advertising as an art director-designer. He began to take photographs at this time and left his job to concentrate on photography as a career. Shooting film in black and white, he travelled around the United States for three months after which he was offered a Guggenheim Scholarship to take pictures on the theme of 'leisure time'.

However Meyerowitz has had his greatest influence as an early advocate of colour photography. He was instrumental in changing the attitude toward the use of colour from one of resistance to nearly universal acceptance. His subject matter altered from incidents on city streets shot with a small 35mm camera to the large format field photograph. He has been awarded the title Photographer of the Year by the Friends of Photography, San Francisco. His work is in the collections of the Museum of Modern Art and the Metropolitan Museum of Art, and has been exhibited and published worldwide.

Over 400 colour illustrations shown in chronological order charting the clean-up process at Ground Zero from September 2001 to May 2002.

GOR004732888
Aftermath: World Trade Center Archive by Joel Meyerowitz
Joel Meyerowitz
Used - Very Good
Hardback
Phaidon Press Ltd
2006-01-01
350
0714846554
9780714846552
N/A
Book picture is for illustrative purposes only, actual binding, cover or edition may vary.
This is a used book - there is no escaping the fact it has been read by someone else and it will show signs of wear and previous use. Overall we expect it to be in very good condition, but if you are not entirely satisfied please get in touch with us.