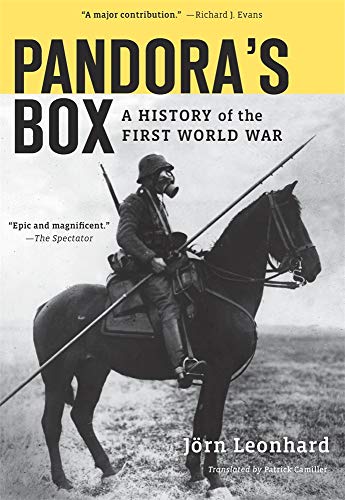 Pandora's Box: A History of the First World War by Joern Leonhard

Winner of the Norman B. Tomlinson, Jr. Prize

"The best large-scale synthesis in any language of what we currently know and understand about this multidimensional, cataclysmic conflict."
-Richard J. Evans, Times Literary Supplement

In this monumental history of the First World War, Germany's leading historian of the period offers a dramatic account of its origins, course, and consequences. Joern Leonhard treats the clash of arms with a sure feel for grand strategy. He captures the slow attrition, the race for ever more destructive technologies, and the grim experiences of frontline soldiers. But the war was more than a military conflict and he also gives us the perspectives of leaders, intellectuals, artists, and ordinary men and women around the world as they grappled with the urgency of the moment and the rise of unprecedented political and social pressures. With an unrivaled combination of depth and global reach, Pandora's Box reveals how profoundly the war shaped the world to come.

"[An] epic and magnificent work-unquestionably, for me, the best single-volume history of the war I have ever read...It is the most formidable attempt to make the war to end all wars comprehensible as a whole."
-Simon Heffer, The Spectator

"[A] great book on the Great War...Leonhard succeeds in being comprehensive without falling prey to the temptation of being encyclopedic. He writes fluently and judiciously."
-Adam Tooze, Die Zeit

"Extremely readable, lucidly structured, focused, and dynamic...Leonhard's analysis is enlivened by a sharp eye for concrete situations and an ear for the voices that best convey the meaning of change for the people and societies undergoing it."
-Christopher Clark, author of The Sleepwalkers

[A] monumental history...Pandora's Box is a major contribution to the historiography of the war, the best large-scale synthesis in any language of what we currently know and understand about this multidimensional, cataclysmic conflict...Leonhard has a rare gift for critical, intelligent narrative...A detailed, judicious and virtually comprehensive account of the war, its origins, its history and its consequences. -- Richard J. Evans * Times Literary Supplement *
[An] epic and magnificent work-unquestionably, for me, the best single-volume history of the war I have ever read...It is the most formidable attempt to make the war to end all wars comprehensible as a whole. -- Simon Heffer * The Spectator *
Extremely readable, lucidly structured, focused, and dynamic, Pandora's Box shows that the world that emerges from the First World War is utterly transformed by the experience. Leonhard's analysis is enlivened by a sharp eye for concrete situations and an ear for the voices that best convey the meaning of change for the people and societies undergoing it. -- Christopher Clark, University of Cambridge, author of The Sleepwalkers: How Europe Went to War in 1914
A library of books were published to mark the centenary of the Great War, but none of them are as good as Joern Leonhard's gracefully written, deeply researched, and constantly illuminating account. This is a wonderful book, filled with new information and fresh insights. -- James Sheehan, Stanford University, author of Where Have All the Soldiers Gone? The Transformation of Modern Europe
[A] great book on the Great War... Leonhard succeeds in being comprehensive without falling prey to the temptation of being encyclopedic. He writes fluently and judiciously. Footnotes are limited to the essentials. This is, one is tempted to say, a German history in the British style. -- Adam Tooze * Die Zeit *
This is probably the meatiest and most comprehensive WWI book yet published... It is consistently intelligent and thoughtful. -- Tyler Cowen * Marginal Revolution *
What makes it so compelling is the analysis of events after the peace agreement of 1918, complete with a political map of the world and a stark look at the intense violence that persisted in Europe. -- Shelby Blackley * Globe and Mail *
Pandora's Box stands out as the most comprehensive recent book on the First World War in any language. Leonhard provides us with a narrative analysis that combines intellectual precision and thematic focus with multiple perspectives. From the microcosm of the trenches to the home fronts, from the big battles in the East and the West to violent upheavals after 1918, Leonhard's treatment of the war is wide-ranging while also giving ample space to the different layers of war experiences. -- Robert Gerwarth, University College Dublin, author of The Vanquished: Why the First World War Failed to End
A brilliant history of what people thought about the First World War-before, during and after. -- Beatrice Heuser * Times Higher Education *
[A] very readable history of the war; thankfully, it is far more than a list of battles, but a thoughtful consideration of the epic destructive event in all its varied ramifications...There are more books on the First World War than anyone (even enthusiasts) could read, but Leonhard's is an honorable addition, a large and weighty volume, literally and metaphorically, that is well worth the time dipping into. Well researched and detailed, Pandora's Box never tosses the reader into a roiling overload of facts and figures, but looks at the horrors of WWI from many different, illuminating angles. -- Thomas Filbin * Arts Fuse *
[Leonhard] presents a stunningly broad and detailed survey of the cataclysm that began the 20th century by first tracing its deep roots in the 19th century and searching out the conflict's furthest ripples... The reading experience is...thrilling, particularly as the facts accumulate and gradually create a crushing realization of how fundamentally the war changed the world... [Leonhard] puts the whole conflict in a broader context than any historian has managed in a single volume in well over a generation... [An] enormously impressive undertaking... Readers...will be richly rewarded. -- Steve Donoghue * Open Letters Review *
Leonhard sets out not simply to write a history of events, but to help his reader understand the greater meaning of the war for the participants...and to us in the twenty-first century...Far more comprehensive in its discussion of national attitudes than virtually all of the recent avalanche of studies on this the centennial of the Great War. * The Bridge *
Provides a sweeping account of the war, one that incorporates its political, social, and cultural dimensions into a description of the campaigns on the various battlefields...The best single-volume history of the war yet written. * Choice *

Joern Leonhard is Professor of European History at the University of Freiburg.

NGR9780674244801
Pandora's Box: A History of the First World War by Joern Leonhard
Joern Leonhard
New
Paperback
Harvard University Press
2020-05-29
1104
067424480X
9780674244801
Joint winner of Norman B. Tomlinson, Jr. Book Prize 2018 (United States)
Book picture is for illustrative purposes only, actual binding, cover or edition may vary.
This is a new book - be the first to read this copy. With untouched pages and a perfect binding, your brand new copy is ready to be opened for the first time.