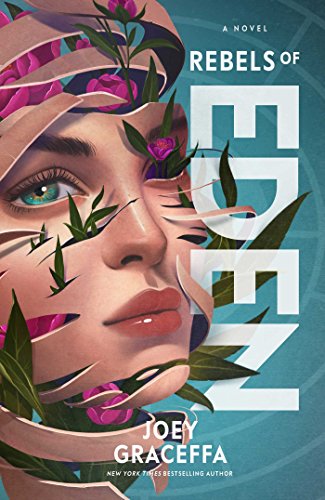 Rebels of Eden
by Joey Graceffa

Used Price
£5.19
New RRP £10.99
Free Shipping in the UK
The electrifying conclusion to the New York Times bestselling series Children of Eden that follows Rowan as she leaves behind the paradise she's always dreamed of and infiltrates Eden to save her family and friends.
Reviews:
Trustpilot
Like New Very Good

Rebels of Eden by Joey Graceffa

The electrifying conclusion to the New York Times bestselling series Children of Eden that follows Rowan as she leaves behind the paradise she's always dreamed of to save Eden - and the world - from a terrible fate.

Rowan is finally in Harmonia, an Earth-friendly, sustainable commune in the wilderness she always thought was dead. Even in this idyllic world, she finds no peace. Harmonia has strict rules - and dire consequences. Thinking about Eden is forbidden, but she's determined to rescue the loved ones she left behind. Though they are in terrible danger, her pleas for help are ignored.

After months of living as one with nature, a shocking reminder of her past pushes Rowan to act. With the help of new friends, she infiltrates Eden. What she discovers is even worse than the situation she left behind. In the chaos of civil war, Rowan and her friends join forces with the second children and other rebels trapped inside. They fight for their lives, and for the future of humanity in this broken Earth.

Joey Graceffa is a leading digital creator, actor, and producer, best known for his scripted and vlog work with YouTube. He is the author of the instant New York Times bestselling memoir In Real Life: My Journey to a Pixelated World and the bestselling novels Children of Eden and its sequel Elites of Eden. In 2013, he produced and starred in his own Kickstarter-funded supernatural series, Storytellers, for which he won a Streamy Award. In 2016, he debuted Escape the Night, a "surreality" competition series for YouTube Red that returned for a third season in the summer of 2018. Joey's other interests include a proprietary accessories/home decor line called Crystal Wolf and supporting various nonprofit organizations for literacy, children's health and wellness, and animal welfare. For more information, please visit ChildrenofEdenBook.com.

GOR010774747
Rebels of Eden by Joey Graceffa
Joey Graceffa
Used - Like New
Hardback
Simon & Schuster Ltd
2018-10-02
384
147116733X
9781471167331
N/A
Book picture is for illustrative purposes only, actual binding, cover or edition may vary.
The book has been read, but looks new. The book cover has no visible wear, and the dust jacket is included if applicable. No missing or damaged pages, no tears, possible very minimal creasing, no underlining or highlighting of text, and no writing in the margins.