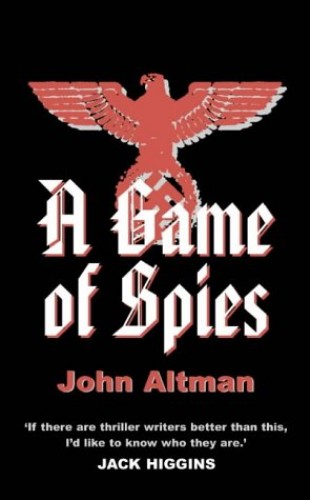 A Game of Spies by John Altman

'If there are thriller writers better than this, I'd like to know who they are.' Jack Higgins

A Game of Spies by John Altman

'If there are thriller writers better than this, I'd like to know who they are.' Jack Higgins

It is February 1940, and England is desperate to find out when and how Hitler will make his move west toward France. Eva Bernhardt, a young sleeper agent in Berlin who has been seduced into spying by a roguish MI6 agent, receives a vital piece of information and makes a run for it. But the Germans are on to her fast - too fast. In a lethal game of ruse and counter-ruse, the British and Germans engage in an intelligence war. Uncertain whom to trust, Eva must take her future into her own hands - and with it, perhaps, the future of the entire war.

A book to devour at one sitting, with dazzling set pieces, unpredictable twists and unforgettable characters.

Praise for 'A Gathering of Spies':

'A ripping read, a book to devour at one sitting.' Alan Hill, Daily Telegraph

'A sizzling zinger of a classic spy story, full of action, suspense and wheels within wheels. With his lean, taut style, Altman doesn't waste a word. Wow!' Stephen Coonts

Born in 1969, John Altman is a musician and a freelance writer. A member of an extended family of writers, he is currently at work on his next novel.

GOR002758872
9780007138869
0007138865
A Game of Spies by John Altman
John Altman
Used - Very Good
Paperback
HarperCollins Publishers
2002-08-05
256
N/A
Book picture is for illustrative purposes only, actual binding, cover or edition may vary.
This is a used book - there is no escaping the fact it has been read by someone else and it will show signs of wear and previous use. Overall we expect it to be in very good condition, but if you are not entirely satisfied please get in touch with us
Trustpilot