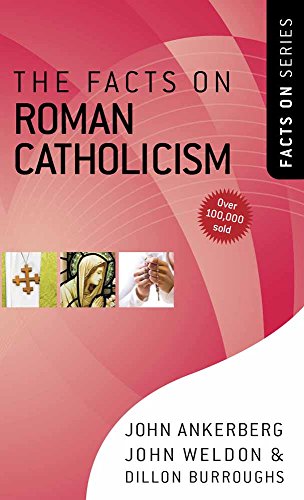 The Facts on Roman Catholicism
by John Ankerberg

John Ankerberg, John Weldon, and Dillon Burroughs, known for their extensive research and Bible knowledge, update The Facts on Roman Catholicism, a biblical evaluation of the Roman Catholic Church. Readers are given a general overview, detailed information, and an explanation of this church's doctrine and historical traditions.

The Facts on Roman Catholicism Summary

The Facts on Roman Catholicism by John Ankerberg

Well-known authors and researchers John Ankerberg, John Weldon, and Dillon Burroughs have updated and revised The Facts on Roman Catholicism, an important title from the popular Facts On Series (more than 1.9 million copies of books from this series sold).

Presented in a convenient question-and-answer format, readers are given a general overview and detailed information based on a biblical evaluation of the Roman Catholic Church. They discover similarities and differences between the basic theologies of Catholicism and Protestantism. Topics include:

John Ankerberg, host of the award-winning John Ankerberg Show, has three earned degrees: an MA in church history and the philosophy of Christian thought, an MDiv from Trinity Evangelical Divinity School, and a DMin from Luther Rice Seminary. He has coauthored the 2-million-selling Facts On series of apologetic books, as well as Taking a Stand for the Bible and Israel Under Fire.

John Weldon has authored or coauthored more than 80 books. He has a Ph.D. in comparative religion and a D.Min. with emphasis in contemporary religious movements, as well as master's degrees in divinity and Christian apologetics. With Dr. John Ankerberg, he has coauthored What Do Mormons Really Believe?, Fast Facts (R) on Islam, the "Facts On" Series of apologetic booklets, and others.

Dillon Burroughs is an activist and the author or coauthor of nearly 30 books on issues of faith and culture, including the groundbreaking Undefending Christianity. Dillon has served among at-risk American youth, constructed housing in Mexico's barrios, provided aid relief in Haiti, and was most recently nominated for a CNN Hero award for his efforts to fight human trafficking. His written and edited works have been featured by NPR, MSNBC, ABC News, and other media outlets.

GOR004784669
The Facts on Roman Catholicism by John Ankerberg
John Ankerberg
The Facts on Series
Used - Very Good
Paperback
Harvest House Publishers,U.S.
2009-03-01
96
0736924035
9780736924030
N/A
Book picture is for illustrative purposes only, actual binding, cover or edition may vary.
This is a used book - there is no escaping the fact it has been read by someone else and it will show signs of wear and previous use. Overall we expect it to be in very good condition, but if you are not entirely satisfied please get in touch with us.