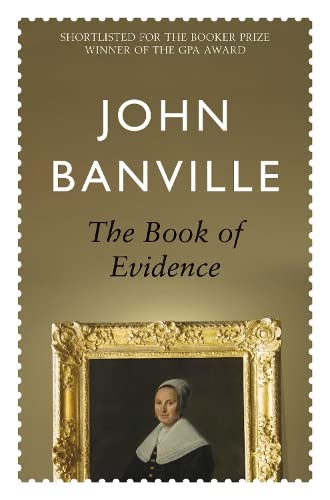 The Book of Evidence
by John Banville

In Stock
£5.99
The darkly compelling confession of an improbable murderer, shortlisted for the 1989 Booker Prize.
Very Good Good
Only 4 left

The Book of Evidence Summary

The Book of Evidence by John Banville

Shortlisted for the Booker Prize, The Book of Evidence by John Banville is a gripping portrait of a cold, deceptive killer; an unreliable narrator with a dark story to tell.

Freddie Montgomery has committed two crimes. He stole a small Dutch master from a wealthy family friend, and he murdered a chambermaid who caught him in the act.

He has little to say about the dead girl. He killed her, he says, because he was physically capable of doing so. It made perfect sense to smash her head in with a hammer. What he cannot understand, and would desperately like to know, is why he was so moved by an unattributed portrait of a middle-aged woman that he felt compelled to steal it . . .

The Book of Evidence Reviews

Banville has excelled himself in a flawlessly flowing prose whose lyricism, patrician irony and aching sense of loss are reminiscent of Lolita. * Observer *
The Book of Evidence is a major work of fiction in which every suave moment calmly detonates to show the murderous gleam within. Banville writes a dangerous and clear-running prose and has a grim gift of seeing people's souls. -- Don DeLillo
One of the most important writers now at work in English - a key thinker, in fact, in fiction. * London Review of Books *
Remarkable. . . If all crime novels were like this one, there would no longer be the need for a genre. -- Ruth Rendell

John Banville was born in Wexford, Ireland, in 1945. His first book, Long Lankin, was published in 1970. His other highly acclaimed books include Nightspawn, Birchwood, Doctor Copernicus (which won the James Tait Black Memorial Prize in 1976), Kepler (which was awarded the Guardian Fiction Prize in 1981), The Newton Letter, Mefisto, Ghosts, Athena, The Untouchable, Eclipse, Shroud and the Man Booker Prize-winning The Sea. He has received a literary award from the Lannan Foundation. He lives in Dublin.

GOR001196084
The Book of Evidence by John Banville
John Banville
Frames
Used - Very Good
Paperback
Pan Macmillan
1998-09-04
224
0330371878
9780330371872
N/A
Book picture is for illustrative purposes only, actual binding, cover or edition may vary.
This is a used book - there is no escaping the fact it has been read by someone else and it will show signs of wear and previous use. Overall we expect it to be in very good condition, but if you are not entirely satisfied please get in touch with us.