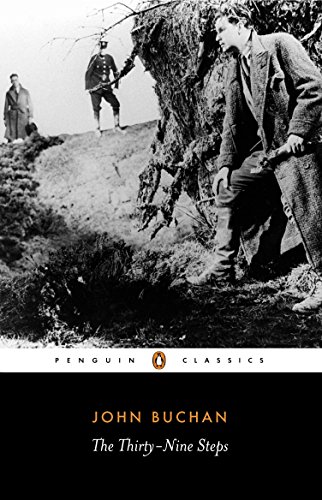 The Thirty-Nine Steps
by John Buchan

Used Price
Free Shipping in the UK
Adventurer Richard Hannay has just returned from South Africa and is thoroughly bored with his London life - until a spy is murdered in his flat, just days after having warned Hannay of an assassination plot that could plunge Britain into a war with Germany.
Reviews:
Trustpilot
Very Good

The Thirty-Nine Steps by John Buchan

A gripping tale of adventure that has enthralled readers since it was first published, John Buchan's The Thirty-Nine Steps is edited with an introduction and notes by Sir John Keegan in Penguin Classics.

Adventurer Richard Hannay has just returned from South Africa and is thoroughly bored with his London life - until a spy is murdered in his flat, just days after having warned Hannay of an assassination plot that could plunge Britain into a war with Germany. An obvious suspect for the police and an easy target for the killers, Hannay picks up the trail left by the assassins, fleeing to Scotland, where he must use all his wits to stay one step ahead of the game - and warn the government before it is too late. One of the most popular adventure stories ever written, The Thirty-Nine Steps established John Buchan as the original thriller writer and inspired many other novelists and filmmakers including Alfred Hitchcock.

In his introduction to this edition, historian Sir John Keegan compares Buchan's life - his experiences in South Africa, his love of Scotland and his moral integrity - with his fictional hero. This edition also includes notes, a chronology and further reading.

John Buchan (1875-1940) was born in Perth, and first began writing at Oxford University, producing two volumes of essays, four novels and two collections of stories and poems before the age of twenty-five. During the First World War he worked both as a journalist and at Britain's War Propaganda Bureau, eventually becoming Director of Information. He published his most popular novel, The Thirty-Nine Steps, in 1915 - and it has never since been out of print.

If you enjoyed The Thirty-Nine Steps, you might like G.K. Chesterton's The Man Who Was Thursday, also available in Penguin Classics.

'Once you've started, you can't put the book down'
Stella Rimington

John Buchan (1875-1940) was born in Perth, Scotland and educated at Oxford where he published five books and won several awards, including one for poetry. He went on to be a barrister, a member of parliament, a soldier, a publisher, a historical biographer, and - in 1935 - he became the Govenor-General of Canada. Today he is best remembered as the author of his perennially popular adventure novels.

GOR001378003
The Thirty-Nine Steps by John Buchan
John Buchan
Used - Very Good
Paperback
Penguin Books Ltd
2004-06-24
144
0141441178
9780141441177
N/A
Book picture is for illustrative purposes only, actual binding, cover or edition may vary.
This is a used book - there is no escaping the fact it has been read by someone else and it will show signs of wear and previous use. Overall we expect it to be in very good condition, but if you are not entirely satisfied please get in touch with us.