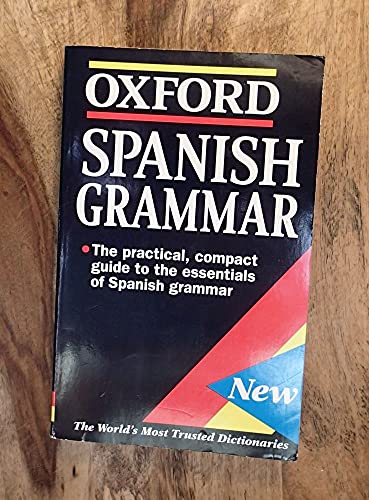 In Stock
£8.99
This text is designed for a broad range of language users. It is suitable for GCSE, A Level and university students needing quick revision or reassurance, self-study or evening class learners, holiday-makers, or anyone requiring a selective guide to Spanish grammar.
Very Good Good Well Read
8 in stock

The problem of standardization uniquely affects Spanish which is spoken in over twenty countries, therefore the type of language described in the grammar is international Spanish. Latin-American usage is included wherever educated usage differs markedly from European. A brief appendix is also included, summarising major points of difference between European and American usage that are not been covered in the body of the book. The appendix on pronunciation is especially detailed as the abbreviated accounts of Spanish pronunciation given in books at this level are frequently misleading. This appendix gives equal prominence to comparisons with British and American pronunciations of English, and American variants of words are given where necessary. Full verb tables and a list of irregular verbs are also given. This book is intended for a broad range of language users: GCSE, A-level or university students needing quick revision or reassurance, self-study or evening class learners, holiday-makers, or anyone requiring a selective guide to Spanish grammar.

John Walden Butt is Reader in Hispanic Studies at King's College, London where he has taught Spanish at all levels for 28 years. He is co-author, with Carmen Benjamin, of A New Reference Grammar of Modern Spanish (Edward Arnold, 1988, Second Edition, 1994) which has become a standard school text.

GOR003867073
Spanish Grammar by John Butt
John Butt
Used - Very Good
Paperback
Oxford University Press
1996-06-30
364
0198600437
9780198600435
N/A
Book picture is for illustrative purposes only, actual binding, cover or edition may vary.
This is a used book - there is no escaping the fact it has been read by someone else and it will show signs of wear and previous use. Overall we expect it to be in very good condition, but if you are not entirely satisfied please get in touch with us.