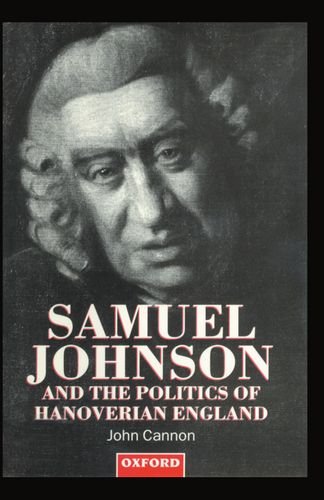 Samuel Johnson and the Politics of Hanoverian England
by John Cannon

In Stock
£8.49
This is a lively new reinterpretation of Georgian political life, by a leading historian of the eighteenth century. Using the career of Samuel Johnson as a point of entry, John Cannon explores major contemporary issues and offers a substantial modification to the traditional picture of Hanoverian England.
Very Good
Only 1 left

Samuel Johnson and the Politics of Hanoverian England Summary

Samuel Johnson and the Politics of Hanoverian England by John Cannon

This is a lively and readable reinterpretation of the Georgian political order. Samuel Johnson's life (1709-1784) spans most of the eighteenth cetnury. His contacts in the literary and cultural, scholarly, and political worlds were wide, including Gibbon, Goldsmith, Fox, Burke, Reynolds, Adam Smith, and many others. This book uses Johnson's remarkable career as a point of entry into Hanoverian England. John Cannon explores major contemporary issues, such as education, the poor, capital punishment, the colonies, and Toryism. He challenges many assumptions about Johnson's own attitudes, and offers a substantial modification to the traditional picture of Johnson and the political world of the eighteenth century.

Samuel Johnson and the Politics of Hanoverian England Reviews

wise and elegant study ... His is not a life of Samuel Johnson, but a clever interpretation of the life designed to explore "some of the ambiguities, contradictions, and uncertainties of Hanoverian England". This is a refreshing approach ... * Times Literary Supplement *
A continuous recognition of the paradoxes of its subject's personality and opinions make Samuel Johnson and the Politics of Hanoverian England a useful book, a genuine contribution by a historian to the deeper understanding of its subject in his time....A shrewd attention to conversational as well as political context distinguished the book's reading of Johnson's comments. * English Language Notes *
a balanced and learned discussion of Johnson's thoughts on 18th century history and politics...it is always clear and well balanced. * Choice *
Throughout this book Professor Cannon has many perceptive and pertinent points to make about both Johnson's political views and the politics of his age. The interpretations offered come from a mind that is shrewd, critical and subtle, they are expressed in a style that is both light and effective, and they reveal an approach resting on deep learning and robust commonsense. It is a book with qualities which Johnson would have admired, and it is a book that only John Cannon could have written. * H.T. Dickinson, University of Edinburgh, British Journal for Eighteenth-century Studies, Vol. 19, part 2, Autumn 1996 *
compelling and provocative * James J. Sack, University of Illinois, American Historical Review, June 1996 *
a rounded portrait of Johnson ... Cannon's account is that of a master historian deeply informative of the age in which Johnson lived, and is a superb guide to its current historiography. * Martin Fitzpatrick, History Today *
Cannon ... in extracting the essential Johnson, pares away at least some of his pompous extremes. The result is a rounded portrait of Johnson who is much more a man of his age than someone deeply committed to an Anglo-Latin political enterprise which fails ... a superb guide to its current historiography. * Martin Fitzpatrick, History Today, May 1996 *
It would be a great shame if only those interested in 'Dictionary' Johnson seek out John Cannon's Samuel Johnson and the Politics of Hanoverian England. The book is in no sense a biography, and Professor Cannon sometimes assumes a knowledge of Johnson's career that few of his readers will have. His book does far more than throw a flood of light on Johnson himself. It is the product of a working lifetime of reading, research and reflection on the Georgian political world and deserves a wide audience. * Peter D.G. Thomas, University of Wales, Aberystwyth, EHR Jun.97 *
One of the most impressive features of Cannon's book is its deft interweaving of close comment on Johnson with wider historical analysis. Cannon's book is the product of a mind steeped in the history and literature of the period. Anyone reading it will benefit from its command both of Johnson's writings and of the wider historical scene, and will be provoked into thought by its underlying theme that eighteenth-century England can plausibly be described as 'Johnson's England'. * Christopher Reid, Queen Mary and Westfield College, The New Rambler, 1995/6 (Vol. DXI *

John Cannon is the author of numerous books, amongst them The Oxford Illustrated History of the British Monarchy (1988) The Fox-North Coalition (CUP, 1970), Parliamentary Reform 1640-1832 (CUP, 1973), Aristocratic Century (CUP, 1984) and as editor Blackwell Dictionary of Historians (Blackwell, 1988).

GOR007243653
Samuel Johnson and the Politics of Hanoverian England by John Cannon
John Cannon
Used - Very Good
Hardback
Oxford University Press
1994-11-10
336
0198204523
9780198204527
N/A
Book picture is for illustrative purposes only, actual binding, cover or edition may vary.
This is a used book - there is no escaping the fact it has been read by someone else and it will show signs of wear and previous use. Overall we expect it to be in very good condition, but if you are not entirely satisfied please get in touch with us.