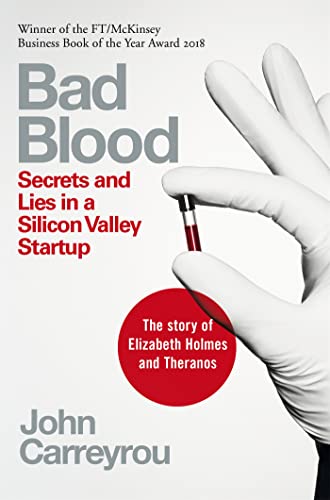 In Stock
£6.99
The shocking true story of the biggest corporate fraud since Enron, a gripping cautionary tale set amid the bold promises and gold-rush frenzy of Silicon Valley.
Like New Very Good Good Well Read
Only 1 left

Bad Blood: Secrets and Lies in a Silicon Valley Startup by John Carreyrou

The full inside story of the breathtaking rise and shocking collapse of Theranos, the multibillion-dollar biotech startup, by the prize-winning journalist who first broke the story and pursued it to the end, despite pressure from its charismatic CEO and threats by her lawyers.

In 2014, Theranos founder and CEO Elizabeth Holmes was widely seen as the female Steve Jobs: a brilliant Stanford dropout whose startup "unicorn" promised to revolutionize the medical industry with a machine that would make blood testing significantly faster and easier. Backed by investors such as Larry Ellison and Tim Draper, Theranos sold shares in a fundraising round that valued the company at more than $9 billion, putting Holmes's worth at an estimated $4.7 billion. There was just one problem: The technology didn't work.

In Bad Blood, John Carreyrou tells the riveting story of the biggest corporate fraud since Enron, a tale of ambition and hubris set amid the bold promises of Silicon Valley.

Now to be adapted into a film, with Jennifer Lawrence to star.

A dazzling story of deception in Silicon Valley . . . It is a tale of heroic cupidity on a scale that made the very best and the very brightest look like the very, very foolish . . . You will not be able to put this book down. * Washington Post *
Riveting . . . a blistering critique of Silicon Valley, a kind of nonfiction corollary to Dave Eggers's The Circle . . . compelling . . . [Carreyrou's] unmasking of Theranos is a tale of David and Goliath . . . The real heroes, though, are his sources: the young scientists who worked at the company and risked their reputations and careers by voicing their concerns. Were it not for their courage, Theranos might still be testing blood today -- David Crow * Financial Times *
You may have thought Carreyrou's Wall Street Journal expose on Theranos was shocking. Turns out that story barely scratched the surface of Elizabeth Holmes' remarkable and all-encompassing web of deceit and lies. A story so incredible you'd think it was fiction. -- James Patterson
Carreyrou tells the story virtually to perfection . . . Bad Blood reads like a West Coast version of All the President's Men. * New York Times *
Gripping . . . Carreyrou presents the scientific, human, legal and social sides of the story in full . . . He unveils many dark secrets of Theranos that have not previously been laid bare. * Nature *
Gripping . . . It is a parable, with all the usual, delicious ingredients of human folly: greed, pride, vanity, lust, anger. Above all, it is an analysis of the phenomenon of hype. * Daily Telegraph *
Simply one of the best books about a startup ever. * Forbes *
Bad Blood reveals a crucial truth: outside observers must act as the eyes, the ears and, most importantly, the voice of Silicon Valley's blind spot . . . It gambled not with our smart phones, our attention or our democracy, but with people's lives. * Paste *
Engaging * The Economist *
11 Fantastic Science Books to Binge Over the Holidays. -- The Year in Review, 2018 * Wired *

John Carreyrou is a member of the Wall Street Journal's investigative reporting team. He joined the Journal in 1999 and has been based in Brussels, Paris, and New York for the paper, winning two Pulitzer prizes.

John has covered a number of topics during his career, ranging from Islamist terrorism when he was on assignment in Europe to the pharmaceutical industry and the U.S. healthcare system. His reporting on corruption in the field of spine surgery led to long prison terms for a California hospital owner and a Michigan neurosurgeon. His reporting on Theranos, a blood-testing startup founded by Elizabeth Holmes, was recognized with a George Polk award, and is chronicled in his book Bad Blood: Secrets and Lies in Silicon Valley.

Born in New York and raised in Paris, he currently resides in Brooklyn with his wife and three children.

GOR009920229
Bad Blood: Secrets and Lies in a Silicon Valley Startup by John Carreyrou
John Carreyrou
Used - Like New
Paperback
Pan Macmillan
2019-01-28
320
1509868089
9781509868087
Winner of Financial Times and McKinsey Business Book of the Year 2018 (UK)
Book picture is for illustrative purposes only, actual binding, cover or edition may vary.
This is a used book - there is no escaping the fact it has been read by someone else and it will show signs of wear and previous use. Overall we expect it to be in very good condition, but if you are not entirely satisfied please get in touch with us.