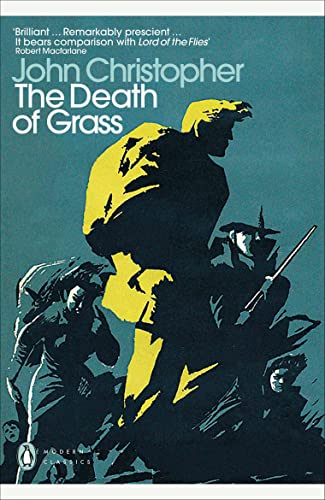 The Death of Grass
by John Christopher

Used Price
£4.99
New RRP £8.99
Free Shipping in the UK
At first the virus wiping out grass and crops is of little concern to John Custance. It has decimated Asia, but Europe is safe and a counter-virus is expected any day. Except, it turns out, the governments have been lying to their people. When the deadly disease hits Britain, society starts to descend into barbarism.
Very Good Well Read

The Death of Grass Summary

The Death of Grass by John Christopher

'Gripping ... of all science fiction's apocalypses, this is one of the most haunting' Financial Times

WITH AN INTRODUCTION BY ROBERT MACFARLANE

A post-apocalyptic vision of the world pushed to the brink by famine, John Christopher's science fiction masterpiece The Death of Grass includes an introduction by Robert MacFarlane in Penguin Modern Classics.

At first the virus wiping out grass and crops is of little concern to John Custance. It has decimated Asia, causing mass starvation and riots, but Europe is safe and a counter-virus is expected any day. Except, it turns out, the governments have been lying to their people. When the deadly disease hits Britain, society starts to descend into barbarism. As John and his family try to make it across country to the safety of his brother's farm in a hidden valley, their humanity is tested to its very limits. A chilling psychological thriller and one of the greatest post-apocalyptic novels ever written, The Death of Grass shows people struggling to hold on to their identities as the familiar world disintegrates - and the terrible price they must pay for surviving.

John Christopher (1922-2012) was the pen name of Samuel Youd, a prolific writer of science fiction. His novels were popular during the 1950s and 1960s, most notably The Death Of Grass (1956), The World in Winter (1962), and Wrinkle in the Skin (1965), all works depicting ordinary people struggling in the midst of apocalyptic catastrophes. In 1966 he started writing science-fiction for adolescents; The Tripods trilogy, the Prince in Waiting trilogy (also known as the Sword of the Spirits trilogy) and The Lotus Caves are still widely read today.

Ifyou enjoyed The Death of Grass, you might like John Wyndham's The Day of the Triffids, also available in Penguin Modern Classics.

The Death of Grass Reviews

The Death of Grass sticks with commendable perseverance to the surface of the earth we know... John Christopher has constructed an unusually dramatic and exciting tale * Daily Mail *
I know and admire The Death of Grass. It was published at roughly the same time as The Day Of The Triffids. In my judgement, it is by far the better book. The characterisation is better and the mood uniformly cold. It is a thrilling and sensible work -- Brian Aldiss
Gripping ... of all science fiction's apocalypses, this is one of the most haunting * Financial Times *

John Christopher (Author)
Christopher Samuel Youd was a British writer best known for his science fiction published under the pseudonym John Christopher. His many novels include The Death of Grass and The Possessors. He won the Guardian Prize in 1971 and the Deutscher Jugendliteraturpreis in 1976, Youd also wrote under several other names including Stanley Winchester, Hilary Ford and Samuel Youd.

Robert Macfarlane (Introducer)
Robert Macfarlane was born in Nottinghamshire in 1976. He is the author of Mountains of the Mind, The Wild Places, The Old Ways and Landmarks. Mountains of the Mind won the Guardian First Book Award and the Somerset Maugham Award and The Wild Places won the Boardman-Tasker Award. Both books have been adapted for television by the BBC. He is a Fellow of Emmanuel College, Cambridge, and writes on environmentalism, literature and travel for publications including the Guardian, the Sunday Times and The New York Times. He is currently working on an illustrated children's book about the natural world in collaboration with illustrator Jackie Morris.

GOR001341591
The Death of Grass by John Christopher
John Christopher
Penguin Modern Classics
Used - Very Good
Paperback
Penguin Books Ltd
2009-04-02
208
0141190175
9780141190174
N/A
Book picture is for illustrative purposes only, actual binding, cover or edition may vary.
This is a used book - there is no escaping the fact it has been read by someone else and it will show signs of wear and previous use. Overall we expect it to be in very good condition, but if you are not entirely satisfied please get in touch with us.