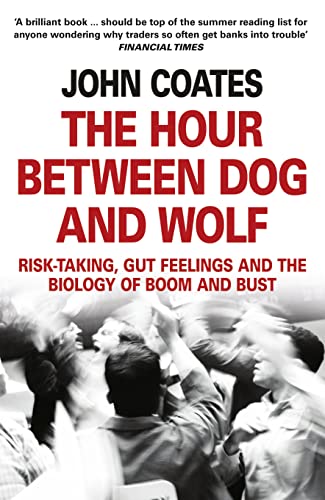 The Hour Between Dog and Wolf
by John Coates

Now shortlisted for the 2012 Financial Times Business Book of the Year Award and the Wellcome Trust Book Prize, The Hour Between Dog and Wolf is a resonant exploration of economic behaviour and its consequences.

The Hour Between Dog and Wolf Summary

The Hour Between Dog and Wolf: Risk-taking, Gut Feelings and the Biology of Boom and Bust by John Coates

Now shortlisted for the 2012 Financial Times Business Book of the Year Award and the Wellcome Trust Book Prize, The Hour Between Dog and Wolf is a resonant exploration of economic behaviour and its consequences.

Shortlisted for the 2012 Financial Times and Goldman Sachs Business Book of the Year Award and the Wellcome Trust Book Prize, this startling and unconventional book from neuroscientist and former Wall Street trader John Coates shows us the bankers in their natural environment, revealing how their biochemistry has a lasting and significant impact on our economy.

We learn how risk stimulates the most primitive part of the banker's brain and how making the deals our bank balances depend on provokes an overwhelming fight-or-flight response. Constant swinging between aggression and apprehension impairs their judgment, causing economic upheaval in the wider world. The transformation between each split-second decision is what Coates calls the hour between dog and wolf, and understanding the biology behind bubbles and crashes may be the key to stabilising the markets.

The Hour Between Dog and Wolf Reviews

`This brilliant book shows how human biology contributes to the alternating cycles of irrational exuberance and pessimism that destabilise banks and the global economy - and how the system could be calmed down by applying biological principles ... Should be top of the summer reading list for Jamie Dimon, chief executive of JPMorgan, and anyone else wondering why traders so often get banks into trouble' Financial Times

`If Coates is right- the evidence he presents is compelling- then the financial; crises that so frequently plague capitalism find their roots in human biology' New Scientist Magazine

`The picture of humans as rational economic machines has gone down the tubes. This book looks at the biology of why Homo economicus is a myth, and no one is better positioned to write this than Coates - he is a neuroscientist and an economist and an ex-Wall Street trader and a spectacular writer. A superb book' Robert Sapolsky, Professor of Neurology, Stanford University, and author of Why Zebras Don't Get Ulcers

`A terrific read - better than any amount of economic analysis because it explains what lies at the root of economic disaster - those biological drivers that cause sane and clever people to make catastrophic decisions. Every banker should be made to read it!' Rita Carter, author of Mapping the Mind

`It makes intuitive sense that biological responses inform the mood of the markets. This book puts flesh on that idea' Economist

John Coates is a senior research fellow in neuroscience and finance at the University of Cambridge. He previously worked on Wall Street for Goldman Sachs, and ran a trading desk for Deutsche Bank. In 2004 he returned to Cambridge to research the biology of financial risk-taking. His work has been published in the Proceedings of the National Academy of Sciences and the Financial Times and been cited in the New York Times, Wall Street Journal, The Economist, New Scientist, Wired and Time.

GOR005144401
The Hour Between Dog and Wolf: Risk-taking, Gut Feelings and the Biology of Boom and Bust by John Coates
John Coates
Used - Very Good
Paperback
HarperCollins Publishers
2013-01-31
304
0007413521
9780007413522
N/A
Book picture is for illustrative purposes only, actual binding, cover or edition may vary.
This is a used book - there is no escaping the fact it has been read by someone else and it will show signs of wear and previous use. Overall we expect it to be in very good condition, but if you are not entirely satisfied please get in touch with us.