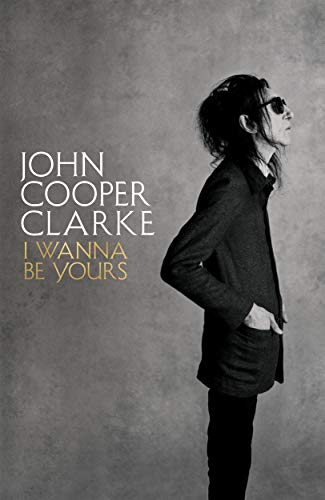 I Wanna Be Yours
by John Cooper Clarke

I Wanna Be Yours Summary

I Wanna Be Yours by John Cooper Clarke

This is a memoir as wry, funny, moving and vivid as its inimitable subject himself. This book will be a joy for both lifelong fans and for a whole new generation.

John Cooper Clarke is a phenomenon: Poet Laureate of Punk, rock star, fashion icon, TV and radio presenter, social and cultural commentator. At 5 feet 11 inches (32in chest, 27in waist), in trademark dark suit, dark glasses, with dark messed-up hair and a mouth full of gold teeth, he is instantly recognizable. As a writer his voice is equally unmistakable and his own brand of slightly sick humour is never far from the surface.

I Wanna Be Yours covers an extraordinary life, filled with remarkable personalities: from Nico to Chuck Berry, from Bernard Manning to Linton Kwesi Johnson, Elvis Costello to Gregory Corso, Gil Scott Heron, Mark E. Smith and Joe Strummer, and on to more recent fans and collaborators Alex Turner, Plan B and Guy Garvey. Interspersed with stories of his rock and roll and performing career, John also reveals his boggling encyclopaedic take on popular culture over the centuries: from Baudelaire and Edgar Allan Poe to Pop Art, pop music, the movies, fashion, football and showbusiness - and much, much more, plus a few laughs along the way.

I Wanna Be Yours Reviews

John Cooper Clarke is one of Britain's outstanding poets. His anarchic punk poetry has thrilled people for decades and his no nonsense approach to his work and life in general has appealed to many people including myself for many years. Long may his slender frame and spiky top produce words and deeds that keep us on our toes and alive to the wonders of the world. -- Sir Paul McCartney
The godfather of British performance poetry * Daily Telegraph *
There are a legion of new young poets who rightly pay homage to Cooper Clarke -- Julian Hall * Independent *
A poet who writes about darkness and decay but makes people laugh, a human cartoon, a gentleman punk, a man who has stayed exactly the same for thirty years but never grown stale. John Cooper Clarke is an original -- Claire Smith * Scotsman *
I say to people, have you heard of John Cooper Clarke and if they say, yes, yeah he's an absolute genius and you just go, 'oh - ok, you've saved me a lot of time -- Steve Coogan
John Cooper Clarke uses words like Chuck Berry uses guitar riffs melody and anger, humour and disdain in equal measure. He's the real deal, really funny and really caustic, the velvet voice of discontent. -- Kate Moss
...nothing short of dazzling -- Alex Turner
of The Luckiest Guy Alive: Pacy, punchy social satire. Reading it is like spending a night at the pub with your funniest friend, who also happens to have an astute take on everything from the state of the high street, to metrosexuality and the NHS. * Evening Standard *
Like his poetry, his prose style is wry and dry. At nearly 500 pages, the book is long though the language is succinct. Mad anecdotes and whimsical gags abound, but wisdom often lurks beneath the wordplay . . . you'd struggle to find a more comprehensive and entertaining account of 60s and 70s popular culture as he contemplates fashion, hair styles, hats, comics, breakfast cereals, magazines, domestic colour schemes and architecture. -- Fiona Sturges * Guardian *

John Cooper Clarke shot to prominence in the 1970s as the original 'people's poet'. Since then his career has spanned cultures, audiences, art forms and continents. Today, JCC is as relevant and vibrant as ever, and his influence just as visible on today's pop culture. Aside from his trademark 'look' continuing to resonate with fashionistas young and old, and his poetry included on the national curriculum syllabus, his effect on modern life is huge. I Wanna Be Yours is his long awaited autobiography.