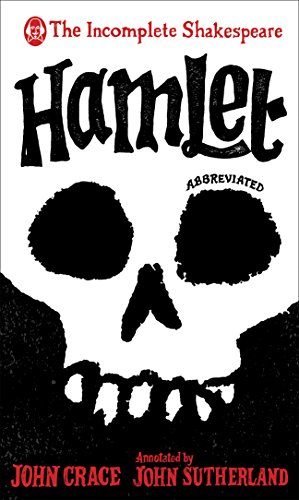 In Stock
£3.59
Funny and incredibly clever, these parodies are a joy for those who know their Shakespeare, perfect for the theatre goer needing a quick recap, and a massive relief for those just desperate to pass their English exam.
Very Good
5 in stock

Alas poor Yorick, he looks not at all well. I knew him, Horatio; a fellow of infinite jest, though sadly finite breath. Though thy gibes be still, yet still thou grins. I seldom saw thy teeth look quite so clean To celebrate the 400th anniversary of Shakespeare's death, this is the fourth of a new collection of the Bard's greatest plays, digested to a few thousand words with invaluable side notes from John Sutherland. Funny and incredibly clever, these parodies are a joy for those who know their Shakespeare, perfect for the theatre goer needing a quick recap, and a massive relief for those just desperate to pass their English exam.

"Witty, modern reworkings" * Evening Standard *
"Hilarious - and all the better for those of us who know our Shakespeare back to front" * Harriet Walter *
"Shrewd interpretations of the Bard; funny footnotes too" * Hugh Bonneville *
"Perfect for anyone who struggles to understand Shakespeare ... hilarious and informative, they really bring Shakespeare to life." * Reality's a Bore *

John Crace (Author) John Crace is the Guardian's parliamentary sketch writer and author of the `Digested Read' columns and he writes regularly for Grazia. He is the author of I Never Promised you a Rose Garden: A short guide to modern politics, the coalition and the general election and also Baby Alarm: A Neurotic's Guide to Fatherhood, Vertigo: One Football Fan's Fear of Success , Harry's Games: Inside the Mind of Harry Redknapp, Brideshead Abbreviated: the Digested Read of the Twentieth Century and The Digested Twenty-first Century. He lives in London. John Sutherland (Author) John Sutherland is Lord Northcliffe Professor Emeritus of Modern English Literature at University College London and previously taught at the California Institute of Technology. He writes regularly for the Guardian, The Times and the New York Times, and is the author of many books including Curiosities of Literature, Is Henry V a War Criminal? (with Cedric Watts), biographies of Walter Scott, Stephen Spender and the Victorian elephant Jumbo, and The Boy Who Loved Books, a memoir.

GOR008303712
Incomplete Shakespeare: Hamlet by John Crace
John Crace
Used - Very Good
Hardback
Transworld Publishers Ltd
2016-10-06
192
0857524283
9780857524287
N/A
Book picture is for illustrative purposes only, actual binding, cover or edition may vary.
This is a used book - there is no escaping the fact it has been read by someone else and it will show signs of wear and previous use. Overall we expect it to be in very good condition, but if you are not entirely satisfied please get in touch with us.