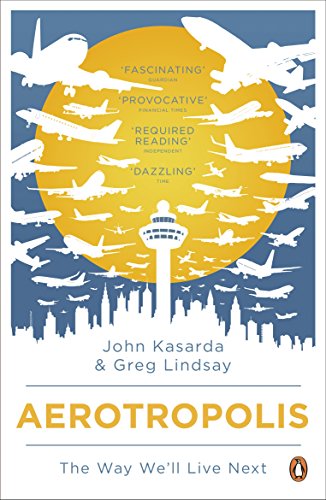 In Stock
£6.49
From Dubai to Amsterdam, Memphis to South Korea, a phenomenon is reshaping the way we live and transforming the way we do business: the aerotropolis. This title looks at how the metropolis of the future will bring us together - and how to make the most of this opportunity.
Very Good
8 in stock

Aerotropolis: The Way We'll Live Next by John D. Kasarda

'Throw out your old atlas. The new version is here' Walter Kirn, author of Up in the Air

From Dubai to Amsterdam, Memphis to South Korea, a new phenomenon is reshaping the way we live and transforming the way we do business: the aerotropolis.

A combination of giant airport, planned city and business hub, the aerotropolis will be at the heart of the next phase of globalization. Drawing on a decade's worth of cutting-edge research, John Kasarda and Greg Lindsay offer a visionary look at how the metropolis of the future will bring us together - and how to make the most of this opportunity.

Fascinating * Guardian *
Provocative * Financial Times *
Dazzling ... Aerotropolis points out that we can still address the oldest needs but in new and liberating ways * Time *
Fascinating and important ... blend[s] jargon-free scholarship with shoe-leather reporting to tell readers why they're living and working as they are ... Kasarda and Lindsay are onto something big * Bloomsberg Businessweek *
The closest thing to a real-world vision to rival that of [H. G.] Wells ... a mind-expanding ride that reminds us, once again, that humanity needs no apocalypse to reinvent itself * World Politics Review *
Aerotropolis redraws the world map ... This lively, thought-provoking book is must reading for anyone interested in how and where we will live and work in a truly global era -- Richard Florida (author of THE GREAT RESET)
Thrilling ... the authors are undoubtedly right * Wall Street Journal *
If you want to be way ahead of the curve in understanding one of the most important drivers of change for the 21st century, read this book -- Paul Romer (founder of Charter Cities)
Fascinating ... The brave new world is on the way, and it's coming in by air * Kirkus Reviews *
An insightful, lavishly researched account, full of the micro-data of interconnectedness: the far-flung factories that produce our computers and flat-screen televisions, the state of the art hospitals in Thailand angling for Western customers priced out of the American health care system * Los Angeles Review of Books *
A prismatic display of the future of the global economy through a sharp and revealing new lens. It makes the mind travel * Barnes & Noble Review *
Required reading for economists, business studies students, architects, urban planners, sociologists - and more than a few novelists and essayists * Independent *
Fascinating ... enthralling * New Yorker *
A fascinating window into the complex emergent urban future. This book is an extremely sophisticated, often devastatingly witty and ironic, interpretation of what is possible over the next two decades -- Saskia Sassen (author of TERRITORY, AUTHORITY, RIGHTS)
Throw out your old atlas. The new version is here -- Walter Kirn (author of UP IN THE AIR)
Kasarda ... and Lindsay convincingly put the airport at the centre of modern urban life * Economist *
Highly recommended * Library Journal *

John D Kasarda is Kenan Distinguished Professor of Management and Director of the Kenan Institute of Private Enterprise at the University of North Carolina. He has worked with multinational firms such as FedEx, Lufthansa, DHL and Bank of America and been an advisor to airports around the globe.

GOR004682606
Aerotropolis: The Way We'll Live Next by John D. Kasarda
John D. Kasarda
Used - Very Good
Paperback
Penguin Books Ltd
2012-03-01
480
0141035226
9780141035222
N/A
Book picture is for illustrative purposes only, actual binding, cover or edition may vary.
This is a used book - there is no escaping the fact it has been read by someone else and it will show signs of wear and previous use. Overall we expect it to be in very good condition, but if you are not entirely satisfied please get in touch with us.