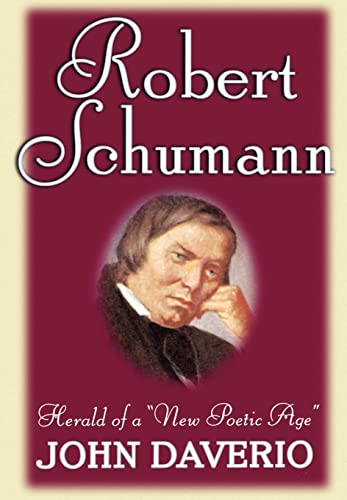 In Stock
£15.99
This work focuses on the work of the romantic composer Robert Schumann.
Very Good
Only 1 left

Forced by a hand injury to abandon a career as a pianist, Robert Schumann went on to become one of the world's great composers. Among many works, his Spring Symphony (1841), Piano Concerto in A Minor (1841/1845), and the Third, or Rhenish, Symphony (1850) exemplify his infusion of classical forms with intense, personal emotion. His musical influence continues today and has inspired many other famous composers in the century since his death. Indeed Brahms, in a letter of January 1873, wrote: `The remembrance of Schumann is sacred to me. I will always take this noble pure artist as my model'. Now, in Robert Schumann: Herald of a `New Poetic Age', John Daverio presents the first comprehensive study of the composer's life and works to appear in nearly a century. Long regarded as a quintessentially romantic figure, Schumann also has been portrayed as a profoundly tragic one: a composer who began his career as a genius and ended it as a mere talent. Daverio takes issue with this Schumann myth, arguing instead that the composer's entire creative life was guided by the desire to imbue music with the intellectual substance of literature. A close analysis of the interdependence among Schumann's activities as reader, diarist, critic, and musician reveals the depth of his literary sensibility. Drawing on documents only recently brought to light, the author also provides a fresh outlook on the relationship between Schumann's mental illness - which brought on an extended sanitarium stay and eventual death in 1856 - and his musical creativity. Schumann's character as man and artist thus emerges in all its complexity. The book concludes with an analysis of the late works and a postlude on Schumann's influence on successors from Brahms to Berg. This well-researched study of Schumann interprets the composer's creative legacy in the context of his life and times, combining nineteenth-century cultural and intellectual history with a fascinating analysis of the works themselves.

does it significantly further our understanding of Schumann as man and, particularly, as musician? The answer is a resounding 'Yes' ... he assesses every work on its own terms, thus helping us to appreciate the amazing breadth of Schumann's inspiration ... this is an inspired book which should gladden the hearts and minds of Schumann lovers. One can only hope that it heralds a 'new poetic age' in Schumann literature. * Steven Isserlis, BBC Music *
should be enthusiastically welcomed ... he is extremely helpful in his comments on the music ... Daverio's musical analyses, especially of the late works, are most helpful and perceptive. * Charles Osborne, The Daily Telegraph *
... it is one of the strengths of John Daverio's book that it devotes so much space to a sympathetic account of some sadly neglected works... / Misha Donat, LRB, 15/7/99

John Daverio was Associate Professor and Chairman of the Musicology Department at the Boston University School for the Arts. He was the author of Nineteenth-Century Music and the German Romantic Ideology, and has published on the music of Schumann, Brahms, and Wagner in a number of professional journals.

GOR005628209
Robert Schumann: Herald of a 'New Poetic Age' by John Daverio
John Daverio
Used - Very Good
Hardback
Oxford University Press Inc
1997-03-03
618
0195091809
9780195091809
Winner of Named an Outstanding Academic Book of 1997 by CHOICE.
Book picture is for illustrative purposes only, actual binding, cover or edition may vary.
This is a used book - there is no escaping the fact it has been read by someone else and it will show signs of wear and previous use. Overall we expect it to be in very good condition, but if you are not entirely satisfied please get in touch with us.