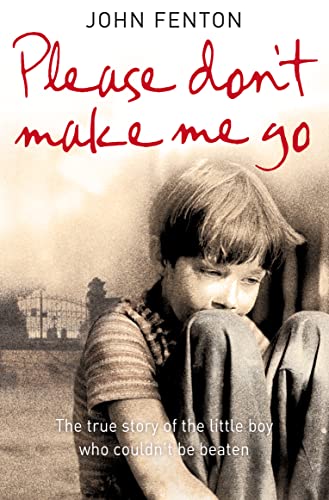 Please Don't Make Me Go: How One Boy's Courage Overcame A Brutal Childhood by John Fenton

Beaten from an early age by his abusive, father, John struggled to fit in at school where his poverty marked him out. When, aged 13, his father brought a charge against him in order to remove him from the family home, John found himself in Juvenile Court - from here he was sent to the notorious St. Vincent's school, run by a group of Catholic Irish Brothers.

Beatings and abuse were a part of daily life - both from John's fellow pupils, but also from the brothers, all of which was overseen by the sadistic headmaster, Brother De Montfort. Tormented physically and sexually by one boy in particular, and by the Brothers in general, John quickly learnt to survive but at the cost of the loss of his childhood.

Please don't make me go, tells in heart-rending detail the day-to-day lives of John and the other boys - the beatings, the weapons fashioned from toilet chains and stones, the loneliness - but we also see the development of John's love of reading, his growing friendship with Father Delaney and his best friend, Bernard, and his unstinting love for his mother whom he feared was suffering at the hands of his violent father.

A painfully, brutally honest account, Please don't make me go is also an example of the resilience of the human spirit as it documents how John learnt to survive and come through his ordeal.

`There is only one word to express my feelings on reading this book and that is: Wow. I was gripped from beginning to end by a tale that filled me with shock and anger, but also impressed me deeply with one boy's sheer humanity and guts...The book has energy, pace and drama.' Helena Drysdale (novelist)

Following his ordeal at St. Vincents school, John Fenton was sent to Ireland by his father and spent several years in the army before becoming a lorry driver. He is now retired and is married with three children. He lives in Cumbria.

GOR000796249
Please Don't Make Me Go: How One Boy's Courage Overcame A Brutal Childhood by John Fenton
John Fenton
Used - Very Good
Paperback
HarperCollins Publishers
2008-09-01
352
0007263783
9780007263783
N/A
Book picture is for illustrative purposes only, actual binding, cover or edition may vary.
This is a used book - there is no escaping the fact it has been read by someone else and it will show signs of wear and previous use. Overall we expect it to be in very good condition, but if you are not entirely satisfied please get in touch with us.