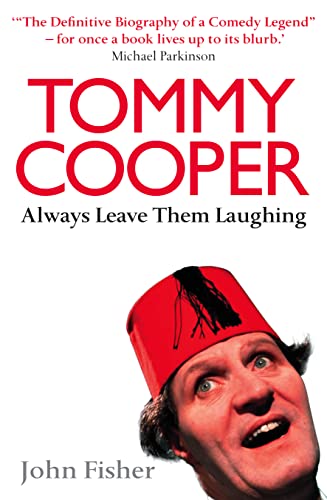 Tommy Cooper: Always Leave Them Laughing: The Definitive Biography of a Comedy Legend by John Fisher

More than just a comedian, Tommy Cooper was a born entertainer. Working in a golden age of British comedy, Cooper stood - literally - head and shoulders above the crowd, and had a magical talent for humour that defied description.

But there was a man behind the laughter that few people saw. John Fisher was Cooper's friend and colleague and witnessed first-hand the moments of self-doubt and inadequacy that contrasted with the genial exterior. Until his tragic death on live television in 1984, Tommy Cooper lived in constant fear of the day he would be found out by his audience. He could never accept the accolades that came so thick and fast from every direction, and died to the sounds of laughter that he never really believed.

Supplementing his own intimate knowledge with material accessed for the first time from the archives of Cooper's agent and manager, Miff Ferrie, and with the full co-operation of the Cooper family, John Fisher's warm, honest and insightful writing skilfully brings alive the man behind the comedic mask in this definitive biography of a comedy legend.

`A monumental and masterly biography of the great Cooper.' Daily Mail

'A masterful work that will deservedly find its way into the Christmas stockings of anyone interested in showbiz.'
The Stage

'It's a measure of how funny he (Cooper) was that this book had me on the floor even when reading about gags I've never seen. Yet this is no hagiography. While it has chapter and verse on how Cooper's comic chaos came into being, it also tells how one of our country's greatest bringers of joy was a boozy, tight-fisted, foul-mouthed, faithless old misery.' The Sunday Times.

`This book is an accolade to a truly talented and complex man who was much more than just a comic.' The Sun

' "The definitive biography of a comedy legend" - for once a book lives up to its blurb.'
Michael Parkinson

`A book with unrivalled access to (and knowledge of) its elusive subject.' The Independent

`... a well balanced, very well researched and thoroughly enjoyable book that at times will have you laughing out loud.' **** The Irish Examiner

John Fisher has a long and distinguished career as a TV producer working in light entertainment with such giants of comedy as Bob Monkhouse, Spike Milligan, Bruce Forsyth & Tommy Cooper. His most recent work includes Channel 4's critically acclaimed "Heroes of Comedy". An authority on popular entertainment, he has written many books on the subject. `Jus' Like That!', his stage celebration of Tommy's life, was a recent West End hit. He is also a member of the Inner Magic Circle.

GOR001205456
Tommy Cooper: Always Leave Them Laughing: The Definitive Biography of a Comedy Legend by John Fisher
John Fisher
Used - Very Good
Paperback
HarperCollins Publishers
2007-05-01
496
0007215118
9780007215119
N/A
Book picture is for illustrative purposes only, actual binding, cover or edition may vary.
This is a used book - there is no escaping the fact it has been read by someone else and it will show signs of wear and previous use. Overall we expect it to be in very good condition, but if you are not entirely satisfied please get in touch with us.