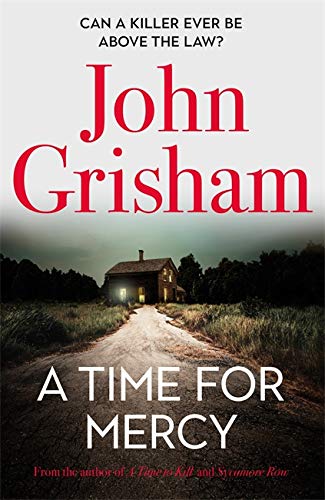 A Time for Mercy
by John Grisham

A Time for Mercy Summary

A Time for Mercy: Jake Brigance, lawyer hero of A Time to Kill and Sycamore Row, is back, in his toughest case ever by John Grisham

Jake Brigance, lawyer hero of A Time to Kill and Sycamore Row, is back, in his toughest case ever.

'When Grisham gets in the courtroom he lets rip, drawing scenes so real they're not just alive, they're pulsating' Mirror

CAN A KILLER EVER BE ABOVE THE LAW?

Deputy Stuart Kofer is a protected man. Though he's turned his drunken rages on his girlfriend, Josie, and her children many times before, the police code of silence has always shielded him.

But one night he goes too far, leaving Josie for dead on the floor before passing out. Her son, sixteen-year-old Drew, knows he only has this one chance to save them. He picks up a gun and takes the law into his own hands.

In Clanton, Mississippi, there is no one more hated than a cop killer - but a cop killer's defence lawyer comes close. Jake Brigance doesn't want this impossible case but he's the only one with enough experience to defend the boy.

As the trial begins, it seems there is only one outcome: the gas chamber for Drew. But, as the town of Clanton discovers once again, when Jake Brigance takes on an impossible case, anything is possible ...

Starring the same hero and setting that featured in John Grisham's multi-million-selling bestsellers A Time to Kill (adapted as a film starring Samuel L. Jackson and Matthew McConaughey) and Sycamore Row, A Time for Mercy is an unforgettable thriller you won't be able to put down.

'A superb, instinctive storyteller' The Times

'Storytelling genius ... he is in a league of his own' Daily Record

A Time for Mercy Reviews

Praise for The Guardians * : *
...Grisham at his passionate best, conveying every ounce of his anger at the corruption behind the law. It is his finest book for some time. Do not miss it * Daily Mail *
A canny and engrossing blend of two types of Grisham novel: enough of the familiar formula of a single lawsuit in a single town, mixed with a more picaresque and multistranded approach that has the significant advantage of taking in a wider swathe of America * The Sunday Times *
Simmering with righteous and understandable anger in place about the manifest injustices of the US criminal justice system * Financial Times *

John Grisham as a child dreamed of being a professional baseball player. After graduating from law school at Ole Miss in 1981, he went on to practice law for nearly a decade, specialising in criminal defense and personal injury litigation. One day, Grisham overheard the harrowing testimony of a twelve-year-old rape victim and was inspired to start a novel exploring what would have happened if the girl's father had murdered her assailants. Getting up at 5 a.m. every day to get in several hours of writing time before heading off to work, Grisham spent three years on A Time to Kill and finished it in 1987.

His next novel, The Firm, spent 47 weeks on The New York Times bestseller list and became the bestselling novel of 1991. Since then, he has written one novel a year, including The Client, The Pelican Brief, The Rainmaker and The Runaway Jury.

Today, Grisham has written a collection of stories, a work of non-fiction, three sports novels, seven kids' books, and many legal thrillers. His work has been translated into 45 languages. He lives near Charlottesville, Virginia.