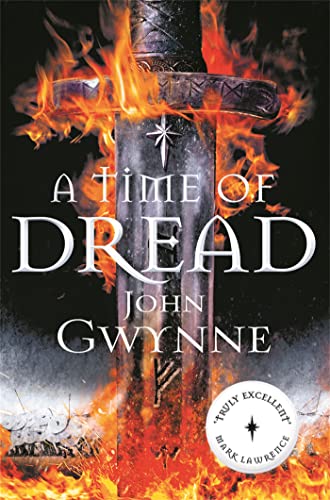 A Time of Dread
by John Gwynne

Used Price
£4.99
New RRP £9.99
Free Shipping in the UK
John Gwynne's fantasy trilogy is a stirring epic where loyalty, truth and courage will be tested - and new heroes will be forged as a mighty conflict awaits. Perfect for fans of David Gemmell and Bernard Cornwell.
Very Good Good

A Time of Dread Summary

A Time of Dread by John Gwynne

'A Time of Dread reminds me of why I became a fantasy enthusiast in the first place' - Robin Hobb, author of Assassin's Apprentice.

Set in the same world as the Faithful and the Fallen quartet, the first novel in John Gwynne's Of Blood and Bone series, A Time of Dread, takes place one hundred years after the end of Wrath.

The Ben-Elim, a race of warrior angels, once vanquished a mighty demon horde. Now they rule the Banished lands. But their dominion is brutally enforced and their ancient enemy may not be as crushed as they thought.

In the snowbound north, Drem, a trapper, finds mutilated corpses in the forests - a sign of demonic black magic. In the south, Riv, a young, tempestuous soldier, discovers a deadly rift within the Ben-Elim themselves.

Two individuals with two world-changing secrets. But where will they lead? And what role will Drem and Riv play in the Banished Land's fate? Difficult choices need to be made. Because in the shadows, demons are gathering, waiting for their time to rise. . .

Continue the heroic fantasy series with A Time of Blood.

'A truly excellent read . . . Exciting, well-written swords and sorcery. Try it on for size' - Mark Lawrence, author of The Broken Empire.

'John Gwynne is one of the modern masters of heroic fantasy' - Adrian Tchaikovsky, author of Children of Ruin.

A Time of Dread Reviews

A Time of Dread reminds me of why I became a fantasy enthusiast in the first place. Fantasy can be an escape from reality, but some stories carry the reader to an enhanced reality, a place where the world seems to have brighter colors and sharper contrasts -- Robin Hobb
A truly excellent read . . . Exciting, well-written swords and sorcery. Try it on for size * Mark Lawrence *
John Gwynne is one of the modern masters of heroic fantasy * Adrian Tchaikovsky *
Fans of epic fantasy have something to cheer about: A Time of Dread is marvellous. Gwynne's writing is superb, delivering not only twists and turns but also nuance and complexity * Sebastien de Castell *
Great evils, conflicted heroes, bloody battles, betrayal, and giants riding battle bears! What's not to love? * Peter Newman *
I loved A Time of Dread and read it from cover to cover in two days. I couldn't put it down * Miles Cameron *
A brilliantly compelling heroic fantasy - likeable characters with nuance, a story that builds at a perfect pace, and a thrilling, climactic ending that kept me reading late into the night * James Islington *
An accomplished and rousing tale of heroes and dark deeds that fans of epic fantasy will devour * Tom Lloyd *
A fierce, gripping tale, and one I found hugely enjoyable * Anna Smith Spark *
A brilliant and bold journey into an unpredictable world, A Time of Dread is an exciting tale of rivalry, politics and a power struggle of epic proportions * Lucy Hounsom *
Gwynne does an excellent job of weaving a classic light vs dark tale while keeping it interesting . . . a sense of foreboding builds along with the pace, balanced by the overall sense of hope * SFX *
The stakes are high, the characters are engaging and relatable, and the action is thrilling . . . you will storm through A Time of Dread * SciFiNow *
Gwynne is a master of his craft and one of the best fantasy writers around . . . A Time of Dread is epic, unpredictable and exhilarating * FantasyBookReview *
Gwynne has truly earned his place among the rank of legendary fantasy authors such as J.R.R. Tolkien, George R.R. Martin, and Brandon Sanderson * BookNest *
Smart and well-crafted epic fantasy * SF and F Reviews *

John Gwynne studied and lectured at Brighton University. He's been in a rock 'n' roll band, playing the double bass, travelled the USA and lived in Canada for a time. He is married with four children and lives in Eastbourne, running a small family business rejuvenating vintage furniture. His debut novel, Malice, won the David Gemmell Morningstar Award for Best Debut.

GOR009277753
A Time of Dread by John Gwynne
John Gwynne
Of Blood and Bone
Used - Very Good
Paperback
Pan Macmillan
2018-09-06
496
1509812938
9781509812936
N/A
Book picture is for illustrative purposes only, actual binding, cover or edition may vary.
This is a used book - there is no escaping the fact it has been read by someone else and it will show signs of wear and previous use. Overall we expect it to be in very good condition, but if you are not entirely satisfied please get in touch with us.