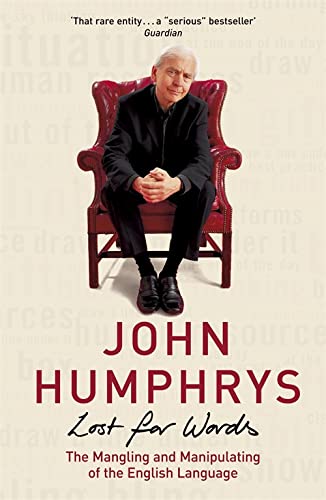 Lost For Words
by John Humphrys

In Stock
£3.99
From Today programme presenter and national treasure John Humphrys, the bestselling cry in book form for better English and an expose of the political uses and abuses of language.
Very Good Good
6 in stock

Lost For Words by John Humphrys

'Let us be very clear about this from the start: John Humphrys is a Good Thing' EVENING STANDARD

From Today programme presenter and national treasure John Humphrys, the bestselling cry in book form for better English and an expose of the political uses and abuses of language.

From empty cliche to meaningless jargon, dangling participle to sentences without verbs, the English language is reeling. It is under attack from all sides. Politicians dupe us with deliberately evasive language. Bosses worry about impacting the bottom line while they think out of the box. Academics talk obscure mumbo jumbo. Journalists and broadcasters, who should know better, lazily collaborate.

In his bestselling Lost for Words, Today presenter and national treasure John Humphrys wittily and powerfully exposes the depths to which our beautiful language has sunk and offers many examples of the most common atrocities. He also dispenses some sensible guidance on how to use simple, clear and honest language. Above all, he shows us how to be on the alert for the widespread abuse - especially by politicians - and the power of the English language.

In a broadcasting career spanning forty years John Humphrys has reported from all over the world for the BBC and presented its frontline news programmes on both radio and television. He has won a string of national awards and been described as a 'national treasure'. He owned a dairy farm for ten years and has homes in Wales and London.

GOR000456551
Lost For Words by John Humphrys
John Humphrys
Used - Very Good
Paperback
Hodder & Stoughton General Division
2005-07-04
352
0340836598
9780340836590
N/A
Book picture is for illustrative purposes only, actual binding, cover or edition may vary.
This is a used book - there is no escaping the fact it has been read by someone else and it will show signs of wear and previous use. Overall we expect it to be in very good condition, but if you are not entirely satisfied please get in touch with us.