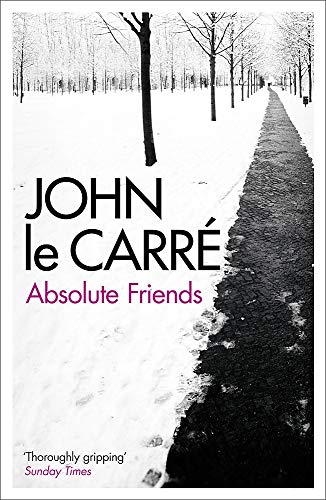 ABSOLUTE FRIENDS is a superbly paced novel spanning fifty-six years, a theatrical masterstroke of tragi-comic writing, and a savage fable of our times, almost of our hours.

The friends of the title are Ted Mundy, British soldier's son born 1947 in a shining new independent Pakistan, and Sasha, refugee son of an East German Lutheran pastor and his wife who have sought sanctuary in the West.

The two men meet first as students in riot-torn West Berlin of the late Sixties, again in the grimy looking-glass of Cold War espionage and, most terribly, in today's unipolar world of terror, counter-terror and the war of lies.

Deriving its scale from A PERFECT SPY and its passion from THE CONSTANT GARDENER, le Carre's new novel presents us with magical writing, characters to delight, and a spellbinding story that enchants even as it challenges.

This is le Carre with a twist, the Old Master developing new techniques for a new age * Raymond Seitz, The Times *
Thoroughly gripping * Sunday Times *
Absolute Friends is vintage John le Carre: complex, often sardonically funny, always galvanically written. * Daily Express *
[Le Carre] has found a worthy enemy, a target for his moral indignation. Moreover he has hit a contemporary tune again. This is an anti-war novel and, very fiercely, an anti-American one. It's written with passion. * Allan Massie, Scotsman *
Truly thrilling * Financial Times *
'The master has not lost his touch . . . one of his most enthralling creations.' * A.N. Wilson, Telegraph *
'A literary master for a generation' * Observer *

John le Carre was born in 1931. His third novel, THE SPY WHO CAME IN FROM THE COLD, secured him a wide reputation which was consolidated by the acclaim for his trilogy TINKER TAILOR SOLDIER SPY, THE HONOURABLE SCHOOLBOY and SMILEY'S PEOPLE. His other novels include THE CONSTANT GARDENER, A MOST WANTED MAN and OUR KIND OF TRAITOR.