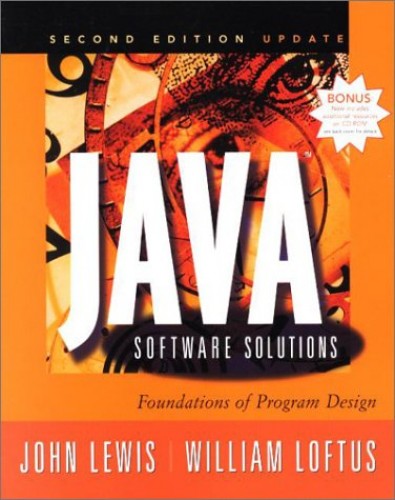 In Stock
£6.49
Embracing the new features of the Java 2 platform as they apply to introductory topics, the new edition of this textbook continues to teach beginning programmers how to design and implement high-quality object-oriented software.
Very Good Good
Only 1 left

Embracing in full the new features of the Java 2 platform as they apply to CS1 topics, this leading textbook continues to teach beginning programs how to design and implement high-quality object-oriented software. New in the second edition is a chapter entitled "Input and Output" (Ch. 7), which explains the class library used earlier in the text and explores other I/O issues such as streams, file I/O, and network-based I/O. Applets and applications are intertwined throughout the book to demonstrate computing concepts-applets, introduced in Ch. 2, build on the excitement of the web, while applications allow students to gain a clear understanding of programming concepts.

Lewis and Loftus have expanded their coverage of classes and objects with this edition (introduced in Ch. 4) to provide more in-depth discussion of methods and parameter passing, method and static variables, and method overloading. Discussion of Swing architecture and components is also new to this edition, as well as the inclusion of new Collection classes.

The Update to the second edition has been published to provide readers with additional resources to enhance their learning. It includes a CD-ROM with various development environments, the textbook example code, and the presentation slides from the book. The typeface for of some of the code has been redesigned to make it more legible. Lastly, the update includes all corrections that have been discovered since the second edition's publication. The main content and flow of the update will remain as it is.


Appendix I. Comparing Java to C++.

GOR000888570
Java Software Solutions: Foundations of Program Design by John Lewis
John Lewis
Used - Very Good
Paperback
Pearson Education (US)
2000-11-06
784
0201725975
9780201725971
N/A
Book picture is for illustrative purposes only, actual binding, cover or edition may vary.
This is a used book - there is no escaping the fact it has been read by someone else and it will show signs of wear and previous use. Overall we expect it to be in very good condition, but if you are not entirely satisfied please get in touch with us.