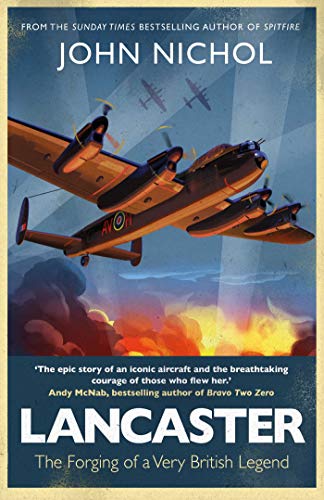 Out of Stock
£7.99
The story of the legendary Lancaster bomber and its brave pilots
Very Good
Only 0 left

Lancaster: The Forging of a Very British Legend by John Nichol

'The epic story of an iconic aircraft and the breathtaking courage of those who flew her' Andy McNab, bestselling author of Bravo Two Zero
'Compelling, thrilling and rooted in quite extraordinary human drama' James Holland, author of Normandy 44
From John Nichol, the Sunday Times bestselling author of Spitfire, comes a passionate and profoundly moving tribute to the Lancaster bomber, its heroic crews and the men and women who kept her airborne during the country's greatest hour of need.

'The Avro Lancaster is an aviation icon; revered, romanticised, loved. Without her, and the bravery of those who flew her, the freedom we enjoy today would not exist.'

Sir Arthur Harris, the controversial chief of Royal Air Force Bomber Command, described the Lancaster as his 'shining sword' and the 'greatest single factor in winning the war'. RAF bomber squadrons carried out offensive operations from the first day of the Second World War until the very last, more than five and a half years later. They flew nearly 300,000 sorties and dropped around a million tons of explosives, as well as life-saving supplies. Over 10,000 of their aircraft never returned. Of the 7,377 Lancasters built during the conflict, more than half were lost to enemy action or training accidents.

The human cost was staggering. Of the 125,000 men who served in Bomber Command, over 55,000 were killed and another 8,400 were wounded. Some 10,000 survived being shot down, only to become prisoners of war. In simple, brutal terms, Harris's aircrew had only a 40 per cent chance of surviving the war unscathed.

'The epic story of an iconic aircraft and the breathtaking courage of those who flew her' -- Andy McNab, bestselling author of Bravo Two Zero
'A wonderful homage to one of the most iconic aircraft ever built: compelling, thrilling and rooted in quite extraordinary human drama' -- James Holland, bestselling author of Normandy 44
'Don't miss this very special book; it's so good. An extraordinarily powerful tribute to the Lanc' that will leave you truly moved and humbled by the scale of what those young men endured night after night in that magnificent, faithful machine to defend freedom from tyranny. Lancaster is the book that they have always deserved.'

-- Rowland White * Bestselling author of Vulcan 607 *
'This remarkable, enlightening book... The human cost of these raids was enormous...The great strength of Nichol's book is that it takes us beyond the statistics. Through the words of the airmen themselves, it illuminates individual lives. The Lancaster was, and is, more than just an aircraft. She is 'a symbol of British freedom, a monument to all those who gave their lives in the war'. John Nichol's book is a fitting tribute to her and to all those who flew in her. -- Nick Rennison * Daily Mail *
'Thrilling...it is rich with moving stories of the young airmen. Lancaster has everything from the thunder of Merlin engines to the courage of the crews. It's bang on target.' -- Bill Todd * Sun *
'His work will appeal to those fresh to this particular branch of Second World War heroism.... Nichol tells a succession of human stories well and clearly. Lancaster leaves us marvelling yet again at the bravery, stoicism and sheer level-headedness of our forebears.' -- Simon Heffer * Sunday Telegraph *
'This book excels in the gripping descriptions of the raids over Germany. 'I can relate to the fear, exhilaration and desperation of battle,' writes Nichol, and this understanding helps him paint a vivid picture of the atmosphere inside the cramped interior of a Lancaster... With his readable style and impressive credentials, Nichol is certain to have another winner with this book.' -- Leo McKinstry * Spectator *
'A completely wonderful, brilliant book; surely Nichol's best yet! I was continuously drawn into the personal stories; it's an emotional roller coaster of a read and a brilliant tribute to the men who flew the Lancaster.' -- Clive Rowley, Squadron Leader and Former Officer Commanding, RAF Battle of Britain Memorial Flight
'Lancaster - The Forging of a Very British Legend is a brilliant and engaging read. A superbly crafted account which is visceral, thought-provoking, sad, funny and completely absorbing. I thought I knew quite a lot about the legendary Lancaster bomber, but this book showed the aircraft in a whole new light.' -- Andy Saunders, Editor, Iron Cross magazine

John Nichol served in the Royal Air Force for fifteen years. On active duty during the first Gulf War in 1991, his Tornado bomber was shot down during a mission over Iraq. Captured, tortured and held as a prisoner of war, John was paraded on television, provoking worldwide condemnation and leaving one of the most enduring images of the conflict. John is the bestselling co-author of Tornado Down and author of many highly acclaimed Second World War epics including Return of the Dambusters, Tail-End Charlies and Spitfire. He has made a number of TV documentaries with Second World War veterans, written for national newspapers and magazines, and is a widely quoted commentator on military affairs.

GOR010533936
Lancaster: The Forging of a Very British Legend by John Nichol
John Nichol
Used - Very Good
Hardback
Simon & Schuster Ltd
2020-05-28
464
1471180468
9781471180460
N/A
Book picture is for illustrative purposes only, actual binding, cover or edition may vary.
This is a used book - there is no escaping the fact it has been read by someone else and it will show signs of wear and previous use. Overall we expect it to be in very good condition, but if you are not entirely satisfied please get in touch with us.