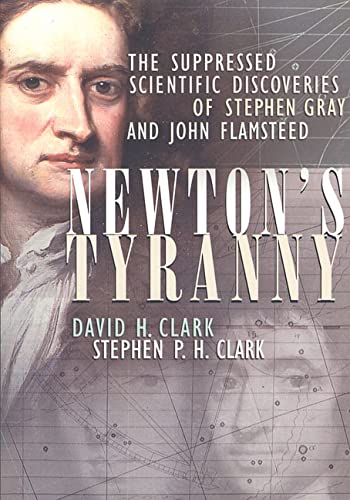 In Stock
£4.49
In a story reminiscent of Sobel's Longitude , an Engineering and Physical Science Research Council director and his Cambridge U. student son expose the unenlightened side of an Enlightenment genius while celebrating little-known pioneers in electrical communications and observational astronomy. Ann
Very Good
Only 1 left

One of the great figures in history, Sir Isaac Newton personifies the triumph of scientific reason over ignorance. Yet for all his contributions to the Enlightenment, Newton was a deeply complex man who sometimes aggressively tried to obscure the intellectual achievements of others.
"Newton's Tyranny" is the story of two men who felt the full wrath of the great man's hostility--the Reverend John Flamsteed, the first Astronomer Royal, and Stephen Gray, a humble dyer and amateur scientist. United not only by a love of science, but by a bitter and protracted conflict with Newton, the two men made significant contributions to science despite the obstacles that Newton placed in their path. Gray produced the first experiment in electrical communications, and Flamsteed pioneered observational astronomy and navigation.
Drawing upon letters and historical documents, "Newton's Tyranny" vividly recreates the British scientific community of the early 18th century. It was an era of great achievement, but the crucible of science was often heated by Machiavellian intrigue, uncontrollable ambition, and larger-than-life personalities. Against this dramatic setting, the saga of Newton, Flamsteed and Gray unfolds, a story of loyalty and commitment against great odds.
A fascinating look at a forgotten piece of science history, "Newton's Tyranny" exposes the dark side of a flawed genius while celebrating the ultimate triumph of two unsung heroes.

"A fascinating new angle on an important episode in 17th century science."
--Sir Martin Rees, Astronomer Royal and author of "Just Six Numbers"
"This is an amazing, fascinating and beautifully written story of scientific intrigue and bullying. After reading this book I can guarantee that your view of Sir Isaac Newton as a person will never be the same again!"
--Colin Humphreys, Cambridge University

Dr. David Clark is Director of Engineering and Science at the Engineering and Physical Sciences Research Council. Until 1985 he led the Space Astronomy research team at the Rutherford Appleton Laboratory in Oxfordshire, England. Clark is the author of "The Cosmos from Space" and the co-author, with his son Andrew, of "Aliens." He lives in Oxford, England.
Stephen P.H. Clark is the son of David Clark and a postgraduate student at Sidney Sussex College, Cambridge University.