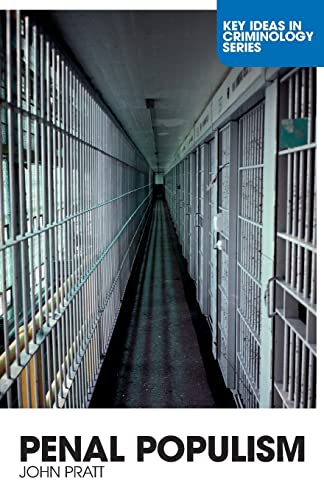 In Stock
£11.99
Penal populism is associated with the public's decline of deference to the criminal justice establishment amidst alarm that crime is out of control. Dealing with the field of criminology, this book examines the role played by penal populism on trends in contemporary penal policy. It is useful for those working in criminology and crime policy.
Very Good
Only 1 left

Expertly drawing on international examples and existing literature, Penal Populism closes a gap in the field of criminology. In this fascinating expose of current crime policy John Pratt examines the role played by penal populism on trends in contemporary penal policy.

Penal populism is associated with the public's decline of deference to the criminal justice establishment amidst alarm that crime is out of control. Pratt argues that new media technology is helping to spread national insecurities and politicians are not only encouraging such sentiments but are also being led on by them. Pratt explains it is having most influence in the development of policy on sex offenders, youth crime, persistent criminals and anti-social behaviour.

This topical resource also covers new dimensions of the phenomenon, including:

This is essential reading for students, researchers and professionals working in criminology and crime policy.

'John Pratt has long understood the importance of this inter-disciplinary approach to our understanding of public discourses on crime and punishment, and this new text on penal populism is yet another example of his ability to put together, and then convincingly apply, an extensive intellectual tool kit... This is an important, acessible international perspective on the rise of penal populism and surely deserves a place in every academic library' - Mike Ryan, University of Greenwich, Punishment and Society

'Pratt's book is a concise text that will appeal to both the academic and criminal justice professional. Its particular value lies in the accessible form with which it presents its case' - Jamie Bennett, Security Group

John Pratt is Professor of Criminology at the Institute of Criminology, Victoria University of Wellington. He has published extensively on the history and sociology of punishment, including Punishment in a Perfect Society (1992), Governing the Dangerous (1997), Dangerous Offenders: Punishment and Social Order (2000, joint editor), Punishment and Civilization (2002), Crime, Truth and Justice (2003, joint editor) and The New Punitiveness (2005, co-editor).

GOR004801445
Penal Populism by John Pratt
John Pratt
Key Ideas in Criminology
Used - Very Good
Paperback
Taylor & Francis Ltd
2006-11-30
224
0415385083
9780415385084
N/A
Book picture is for illustrative purposes only, actual binding, cover or edition may vary.
This is a used book - there is no escaping the fact it has been read by someone else and it will show signs of wear and previous use. Overall we expect it to be in very good condition, but if you are not entirely satisfied please get in touch with us.