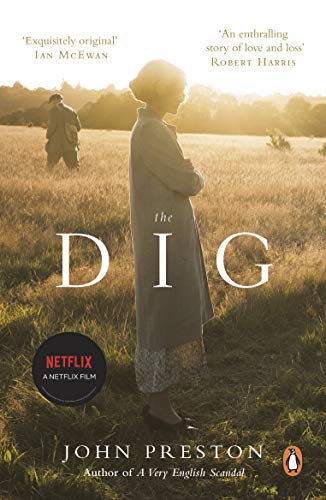 The Dig
by John Preston

'An enthralling story of love and loss' Robert Harris

In the long hot summer of 1939 Britain is preparing for war. But on a riverside farm in Suffolk there is excitement of another kind: Mrs Petty, the widowed farmer, has had her hunch proved correct that the strange mounds on her land hold buried treasure. As the dig proceeds against a background of mounting national anxiety, it becomes clear that this is no ordinary find...

'A tale of rivalry, loss and thwarted love so absorbing that I read right through lunchtime one day, and it's not often I miss a meal' Nigella Lawson

'A delicate evocation of a vanished era' Sunday Times

'Very fine, engrossing, exquisitely original' -- Ian McEwan
'An enthralling story of love and loss, a real literary treasure. One of the most original novels of the year' -- Robert Harris
'You don't need to be in archaeology - this is a tale of rivalry, loss and thwarted love. It's so absorbing that I read right through lunchtime one day, and it's not often I miss a meal' -- Nigella Lawson
'A rich vein of dry humour runs throughout' -- Evening Standard
'Intriguing, tender and entertaining ... easily Preston's best' -- Independent
'A delicate, quietly affecting human drama' -- Daily Mail
'A moving novel that coheres wonderfully as it progresses' -- Spectator
'A delicate evocation of a vanished era' -- Sunday Times
Wonderful, evocative. From this simple tale of dirt, Preston has produced the finest gold. He keeps an iron grip on the reader's attention -- Observer
'Beautifully written...there is a true and wonderful ending to the story' -- Bill Wyman * Mail on Sunday *
'Wistful and poignant. A masterpiece in Chekhovian understatement' * Times Literary Supplement *
'Exciting, evocative and beautifully written. A treasure in itself' -- Griff Rhys Jones
'Shimmers with longing and regret . . . Preston writes with economical grace . . . He has written a kind of universal chamber piece, small in detail, beautifully made and liable to linger on in the heart and the mind. It is something utterly unfamiliar, and quite wonderful' -- Michael Pye * The New York Times Book Review *

John Preston is a former Arts Editor of the Evening Standard and the Sunday Telegraph. For ten years he was the Sunday Telegraph's television critic and one of its chief feature writers. His most recent book, A Very English Scandal, was published to great acclaim in 2016 and turned into BAFTA-winning BBC drama series.

NGR9780241989630
The Dig: Now a major motion picture starring Ralph Fiennes, Carey Mulligan and Lily James by John Preston
John Preston
New
Paperback
Penguin Books Ltd
2021-01-05
240
0241989639
9780241989630
N/A
Book picture is for illustrative purposes only, actual binding, cover or edition may vary.
This is a new book - be the first to read this copy. With untouched pages and a perfect binding, your brand new copy is ready to be opened for the first time.