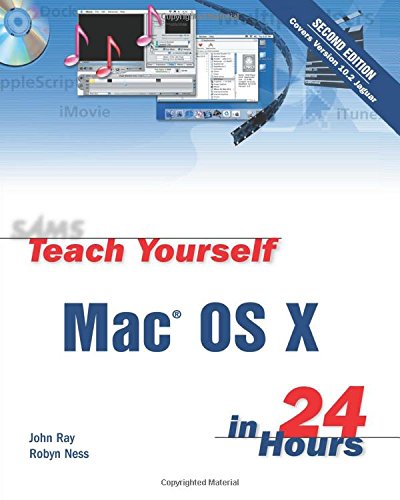 An uncomplicated, easy-to-understand introduction and guide to successfully using Mac OS X for the first time.

Underneath the colorful interface of Mac OS X is a powerful, complicated operating system based on BSD Unix. And Mac users of all kinds need help both in figuring out how to run OS X and in understanding how it worked and how to get the most out of it.

In late Summer 2002 Apple is expected to release a new version of OS X -- code-named "Jaguar" -- that will add some end user features (like iChat), and that will improve OS X's stability.

The second edition of Sams Teach Yourself Mac OS X in 24 Hours helps new users to understand how the new OS (different from the traditional Mac OS, as well as Windows) functions, and how to use it successfully. The book also explores how to use the native OS X applications that ship with the product.

John Ray is an award-winning developer and security consultant with more than 16 years of programming and administration experience. He has worked on projects for the FCC, the National Regulatory Research Institute, The Ohio State University, Xerox, and the State of Florida, as well as serving as IT Director for Blue Cosmos Design, Inc. He has written or contributed to more than 10 titles currently in print, including Mac OS X Unleashed, Special Edition Using TCP/IP, Sams Teach Yourself Dreamweaver MX Application Development in 21 Days, and Maximum Linux Security. He bought his first Macintosh in 1984 and remains a strong proponent for the computer and operating system that revolutionized the industry.

Robyn Ness holds a master's degree in psychology with a specialization in judgment and decision making. She currently works as a Web developer for the Section of Communications and Technology at The Ohio State University, focusing on issues of usability and content design.

(NOTE: Each chapter concludes with a Summary, Q&A, and Workshop.)

I. INTRODUCTION TO MAC OS X.

GOR008309856
Sams Teach Yourself Mac OS X in 24 Hours by John Ray
John Ray
Used - Very Good
Paperback
Pearson Education (US)
2002-11-06
456
0672324741
9780672324741
N/A
Book picture is for illustrative purposes only, actual binding, cover or edition may vary.
This is a used book - there is no escaping the fact it has been read by someone else and it will show signs of wear and previous use. Overall we expect it to be in very good condition, but if you are not entirely satisfied please get in touch with us.