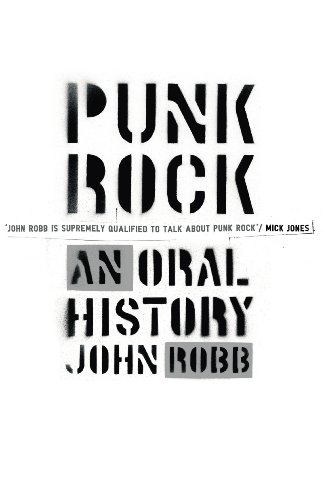 In Stock
£15.99
From the widely debated roots of punk in the late-Sixties through to the fallout of the post-punk period in 1984, and the ongoing influence on today's bands, Punk Rock is the definitive oral history of an inimitable and exciting movement.
Very Good Well Read
Only 1 left

'To see The Clash on the White Riot tour was like discovering how to be a rock star: you just did it yourself. You didn't wait for someone to come and discover you. That was the most important thing that came out of punk... We came home and we cut our hair and bought skinny trousers. It was year zero. That was the moment for me' Billy Bragg Punk Rock is a book like no other. It is an oral history of a radical movement which exploded in Seventies Britain. With its own clothes, hair, artwork, fanzines and radical politics, Punk boasted a DIY ethos that meant anyone could take part. The scene was uniquely vibrant and energetic, leaving an extraordinary legacy of notorious events, charismatic characters and inspirational music. John Robb has spent over a year interviewing more than 100 contributors including Glen Matlock, Mick Jones, Don Letts, Slash, Billy Bragg, Hugh Cornwell and Captain Sensible. Now, for the first time, they give the inside view on events such as The Sex Pistols' swearing live on the Bill Grundy TV show and staging their anti-Jubilee riverboat party on the Thames, famous gigs at The Roxy and 100 Club, and the groundbreaking records by The Pistols, The Clash, The Damned and others. From the widely debated roots of punk in the late-Sixties through to the fallout of the post-punk period in 1984, and the ongoing influence on today's bands, Punk Rock is the definitive oral history of an inimitable and exciting movement.

"John Robb is a great writer... and he is supremely qualified in my opinion to talk about punk rock" -- Mick Jones, The Clash
"John Robb is as punk rock as The Clash" -- Alan McGee

John Robb is a musician, writer, music journalist and TV presenter. He formed the seminal punk/alt-rock band The Membranes in 1977, and still carries the punk flame today as lead singer of Goldblade, renowned for their incendiary live shows. He has written acclaimed biographies of The Stone Roses and The Charlatans, as well as The Nineties: What the F**k Was That All About?, all published by Ebury Press. http://www.goldblade.com

GOR001191111
Punk Rock: An Oral History by John Robb
John Robb
Used - Very Good
Paperback
Ebury Publishing
2006-02-27
576
0091905117
9780091905118
N/A
Book picture is for illustrative purposes only, actual binding, cover or edition may vary.
This is a used book - there is no escaping the fact it has been read by someone else and it will show signs of wear and previous use. Overall we expect it to be in very good condition, but if you are not entirely satisfied please get in touch with us.