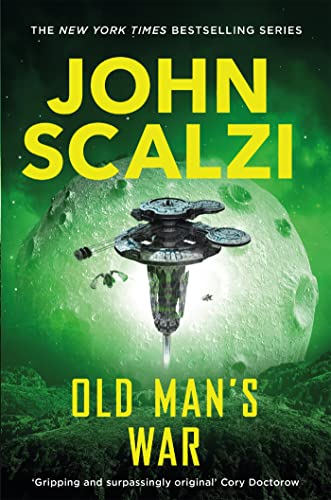 At seventy-five years old, John Perry is after a fresh start - so, naturally, he joins the army. Earth's military machine can transform elderly recruits, restoring their lost youth. But in return, its Colonial Defence Force demands two years of hazardous service in space. This is how Perry finds himself in a new body, crafted from his original DNA. A genetically enhanced and upgraded new body, ready for battle.

But upgrades alone won't keep Perry safe. He'll be fighting for his life on the front line as he defends humanity's colonies from hostile aliens. He'll pay the price for his choices, and he'll discover the universe is even more dangerous than he imagined.

Continue the gripping space war series with The Ghost Brigades.

Gripping and surpassingly original. It's Starship Troopers without the lectures . . . It's funny, it's sad, and it's true -- Cory Doctorow
I enjoyed Old Man's War immensely. A space war story with fast action, vivid characters, moral complexity, and cool speculative physics, set in a future you almost want to live into, and a universe you sincerely hope you don't live in already -- Ken MacLeod
John Scalzi is the most entertaining, accessible writer working in SF today -- Joe Hill
Scalzi is one of the slickest writers that SF has ever produced * Wall Street Journal *
Clever dialogue, fast-paced story and strong characters * The Times *
It gladdens the reader's heart . . . great fun * Daily Telegraph *
Top-notch. His combat scenes are blood roiling * Washington Post *
Astonishingly proficient * Publishers Weekly (starred review) *

John Scalzi is one of the most popular and acclaimed SF authors to emerge in the last decade. His debut Old Man's War won him science fiction's John W. Campbell Award for Best New Writer. His New York Times bestsellers include The Last Colony, Fuzzy Nation, Lock In, and also Redshirts, which won 2013's Hugo Award for Best Novel. Material from his widely read blog Whatever has also earned him two other Hugo Awards. He lives in Ohio with his wife and daughter.

GOR007338181
Old Man's War by John Scalzi
John Scalzi
The Old Man's War series
Used - Very Good
Paperback
Pan Macmillan
2015-11-05
320
1447295374
9781447295372
Winner of Locus Award Best First Novel 2006 (UK) Short-listed for Hugo Award For Best Novel 2006 (United States)
Book picture is for illustrative purposes only, actual binding, cover or edition may vary.
This is a used book - there is no escaping the fact it has been read by someone else and it will show signs of wear and previous use. Overall we expect it to be in very good condition, but if you are not entirely satisfied please get in touch with us.